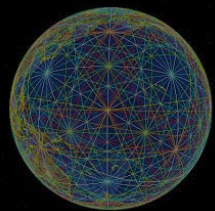 “Ley lines (/leɪ/) refer to straight alignments drawn between various historic structures and prominent landmarks. The idea was developed in early 20th-century Europe, with ley line believers arguing that these alignments were recognised by ancient societies that deliberately erected structures along them. Since the 1960s, members of the Earth Mysteries movement and other esoteric traditions have commonly believed that such ley lines demarcate “earth energies” and serve as guides for alien spacecraft. Archaeologists and scientists regard ley lines as an example of pseudo-archaeology and pseudo-science.” – Wikipedia

If you’ve read a lot of novels focusing on ancient magic, including The Da Vinci Code, you’ve probably encountered the concept of Ley lines. I’m interested in them, but have never had the opportunity to investigate them, much less travel to a purported location.

If you are curious about them, here’s a link to a post from Dreamcatcher Reality that’s the best explanation of Ley lines I’ve seen in ages: https://dreamcatcherreality.com/ley-lines-matrix/

I don’t necessarily agree with Wikipedia except to say that they are speaking about the view of mainstream science. I find Dreamcatcher reality to be an interesting site, but I don’t use its information in my novels because it’s rather like Jane Roberts’ “Seth Materials” in that I can’t prove it. Even thought I write fiction, I want the details to be true; doing that makes for a stronger story.

Malcolm R. Campbell is the author of the four-part Florida Folk Magic Series in which the hoodoo magic was verified to the greatest extent possible.