After Bob Dylan won the Nobel Prize for Literature in 2016, I figured there was a chance for those of us odds makers had written off. So, I have my speech ready. It begins, “Åh, det borde du inte ha.” And it ends, “Så länge och tack för alla kronor.” 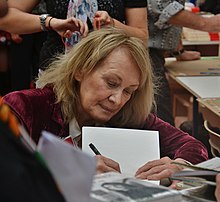 I checked the latest line at Ladbrokes, and they still favor French author Annie Ernaux (shown here) at 8 to 1 odds. Jamaica Kincaid is sitting at 12/1 and Jon Fosse was at 14/1. The first couple of times I went to a horse race, I put $2 on along shot when I saw that if I won I’d get a big pay off. I lost the $2.  I wonder how many people had money riding on Bob Dylan in 2016.

I was happy when Louise Glück won the nobel last year because I’ve been reading her work for ages. She writes with power and truth, both of which have attracted me to her work.

Alex Shephard writes, in the New Republic, “Every year I publish this preview, and people bet real, actual money based on it. If you are reading this because you want to bet on the Nobel Prize in Literature, please—and I can’t stress this enough—don’t do that. Buy something useful instead, like a lottery ticket. Or bet on the Nobel Prize in Literature, just do the exact opposite of what I say.”

Nonetheless, he thinks Maryse Conde, Ngũgĩ wa Thiong’o, Yan Lianke, Can Xue, and Yu Hua. As he warns, don’t bet on it.

No Americans are favored this year. So, there it is. I thought that if this wasn’t my year, then it was probably going to be Nora Roberts’ year. Or even Tom Clancy, may he rest in peace even though “he” keeps churning out new stuff.

Malcolm R. Campbell is the author of books, including “Fate’s Arrows,” which somebody needs to translate into Swedish before next year’s prizes.

UPDATE: 10-7-21 Apparently Tanzanian writer Abdulrazak Gurnah wasn’t on anyone’s radar. He lives in England and has a publisher there, but not a U.S. publisher. I suspect that will change. You can read the BBC story here: https://www.bbc.com/news/entertainment-arts-58828947