My ancestry is mostly Scottish, instilled in me at an early age by my father and the books I found on our shelves when I was young. I am surprised, though, at my comfort level in reading Scots and how soon after reading a book written in Scots my speech takes on that unmistakable lilt. It’s somewhat embarrassing actually because people think I’m putting on airs.

I have argued for years with authors writing about highlanders who are presented as speaking Scots, a lowland language, rather than Highland English which is influenced by Gaelic. It comes down to the notion, I think, that Americans think all Scots speak the language of the lowlands but exhibit the fiery passion of the Highlanders which, some say, is characterized by sex, fighting, and drinking. 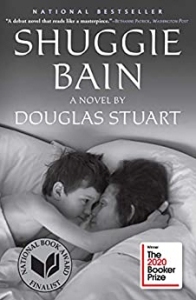 huggie Bain, the Booker Prize-winning novel by Douglas Stuart, is altogether another tin o’ worms. If you’re planning on visiting Glasgow, I urge you to read this book first so you’ll be used to not only the profanity of choice but Glaswegian often called “Glasgow Patter.” If you have trouble with it, consult 100 Glaswegian words that prove you are from Glasgow.

The article notes that Glasgow patter is a language of the streets, and that’s certainly true of the characters, speech, and lifestyles you’ll find in Shuggie Bain. In “real life”–unless we travelled to Glasgow and ended up in the “wrong” part of town–most of us would never meet such people, forget wanting to know them better, much share a strong lager with them.

Critics have called the novel “dark” and they are right. They’ve also called in a masterpiece, and the farther I read, the more I’m convinced they’re right about that, too. I have always thought that the Brits, in general, are a lot more earthy than Americans–perhaps demonstrated in such common expressions as “oh bugger” and “sod off” that we wend to avoid on this side of the pond. This earthy tone is clearly prevalent in the novel and would be viewed in the States as over-the-top chauvinistic, if not misogynistic.

But the writer in me wants to know what makes this novel a masterpiece and what motivates its characters. So I will continue, often with a smile at some of the things people say and do, to keep reading even though I might be totally scunnered by the time I get to the last page.

Is anyone else here reading the book yet?