Here’s how you can make your eyes glaze over. Consider writing a post about the first lines of novels, go online and read through the 100000000 sites listing famous first lines, and then after you’ve absorbed a lot of icing and no cake, you won’t want to read another book for the rest of your life. 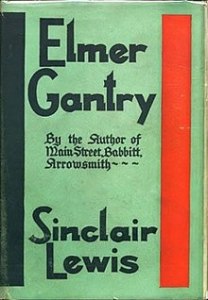 Just to get it out of the way, “Elmer Gantry was drunk.” is my favorite first line because it so aptly sets the stage for Sinclair Lewis’ 1926 satire. It’s likely there aren’t a lot of people reading that book these days, though there was probably an upsurge when the powerful 1960 film starring Burt Lancaster, Jean Simmons, and (in a role like no other in her filmography) (Shirley Jones. I enjoyed both the book and the movie even though they’re very different.

Before my eyes glazed over, I was going to talk about opening lines, why I liked some, why I didn’t like others, and then see what your favorite lines are.  But now I’m overwhelmed, and not in a good way, with all the choices. Sure, most lists include Lolita – Vladimir Nabokov, Anna Karenina – Leo Tolstoy, One Hundred Years of Solitude – Gabriel Garcia Marquez, and Slaughterhouse-Five – Kurt Vonnegut. I’ve read these books and all the first lines (except for Marquez’ line which I detest) might make an interesting discussion. But then, I had to look at longer and longer lists and discovered that not only were my eyes glazed over, but my consciousness as well: there was no way to limit the discussion and I felt like I’d just suffered through the punch lines of a hundred jokes.

I have similar feelings about lists or discussions about favorite songs, favorite movies, favorite poems, favorite paintings, and even favorite novels. It’s lame to put it this way, but all those favorites are like comparing apples to oranges–or possibly, apples to anchovies. My mood, and possibly who I was with, is often a big factor in my choice of a favorite anything. Sometimes I disappoint myself by re-reading a favorite novel and finding out that I don’t like it any more.

When I see a first line while reading a book for the first time, I might think, “Oh, that’s nice,” but when I see it in a list of first lines, it seems more like trickery. Unfair, I know. I guess I like the lines in context rather than pulled out of their novels like teeth.  When they’re glommed together, I feel like reaching for a drink or two or ten, and then writing, “Malcolm Campbell was drunk. He was eloquently drunk, lovingly and pugnaciously drunk. He leaned against the bar of the Old Home Sample Room, the most gilded and urbane saloon in Cato, Missouri, and requested the bartender to join him in ‘The Good Old Summer Time,’ the waltz of the day.”

Actually, I’d probably swap out “The Good Old Summer Time” with Ellington and Webster’s 1941 “I Got It Bad (and That Ain’t Good)” because it really is a cool song title. I’m sure there are other worthy titles I could have chosen, but I didn’t want to look.

If you have a favorite opening line, please add it in the comments list. If you have a hundred, don’t add them.