You’ve heard of Facebook, right? It’s part of the so-called social media. It’s social as long as you are posting humorous pictures of cats, celestial pictures of oceans and sunsets, and cartoons about stupid people getting their just desserts. It’s less social when one person makes a political comment and another person politely takes issue with that comment.

You’d think I’d know better, but yesterday I suggested that plans for soaking the rich were unlikely to either pay for our many underfunded social programs or get rid of the national deficit. I based this on (a) the fact that the rich pay more taxes already than large segments of the population, and (b) that a study a year or so ago said that if the government took all of the rich’s money, it would hardly make a dent in our nation’s shortfalls

My point, in part, was that one way to balance the budget was controlling spending, especially what I characterized as an obscenely large military budget. 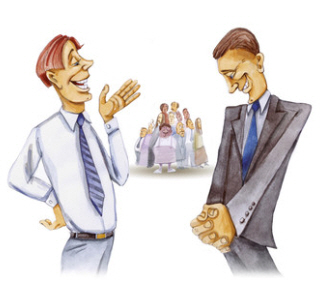 While I was away from that conversation, many people stopped by to attack me with defamatory statements which were easier to think up than any real fact-based arguments. Several years ago, I was shocked to hear that many intelligent people only listen to the commentators they agree with. That is, they don’t allow themselves access to balanced news reporting or any commentary that includes ideas from multiple sources.

Facebook, for all its lovely cat pictures and sentimental graphics, proves to me that it’s hard to compete with ignorance. One meme recently suggested disbelief that a regular person could be so vain as to think that s/he knew more about a scientist’s subject than the scientist. There were a lot of LIKES on this one. Yet the same people didn’t seem to feel that way about anything else. Saying anything they don’t like–but cannot prove one way or the other–is like poking a fire hill with a stick. It’s best not to do it.

Yet, I’m a volatile person of Scot’s ancestry and, as everyone knows, we’re best described by opinions defined by sex, drinking, and fighting. This means we’re likely to say anything about anything. Soaking the rich is apparently the Panacea that will solve all of our problems. Whenever somebody says that my first thought is, “How stupid can you get?”

So, I left a casual comment on the soaking the rich thread on Facebook and came back hours later to discover most people in the thread thought I was the anti-Christ. They had no facts to prove it or to prove why whey they disagreed. So, of course, character assassination was the easiest route the could take.

There was no point in arguing with them, so I simply deleted my comment. Since all of their comments were linked to mine, everything they said disappeared as well. I won’t be going back to that person’s profile because he had ample opportunity to keep the discussion on track rather than allowing it to degenerate into a childish grade school argument.

I see this approach everywhere, even amongst our so-called national leaders. It’s a sad thing, I believe, when they can’t stick to the facts in a debate and choose to find real or imagined dirt on those they’re debating.