Why do I write?

The short answer to that question is, “I don’t know.”

When asked, I usually respond with:

Why do you read?

Most people have trouble answering that question other than listing the reasons other people read and using them to make people go away.

I know why I read: so I have less time to write. I was actually a writing mentor once and gave it up after a while when I realized I was teaching my mentees all my bad habits. My bad writing habits have saved me from a life in an institution, a university or a mental institution, places like that.

When people ask me why I write, I usually tell them that as I got older the gigolo business wasn’t supporting the lifestyle to which I’d become accustomed. As it turns out, writing isn’t supporting that either.

We’re told by gurus that we read and write stories because they tell us the important things about the world. I think I’ve learned more from reading fiction than from history books or the nightly news. I’ve probably discovered a lot more from writing than I have from any other journey. But then people ask me why I write, I can’t really say that because it sounds crazy.

Writers who sound crazy tend to earn more and find more readers than writers who sound sane. I think this is because sanity is boring. Books that are boring don’t end up on the New York Times bestseller list. Or in Oscar-winning movies.

I think we all want to know. We see that the world appears to be in a mess: War. climate change. Murder. One religion vs. another. BS on the evening news every night.

Most of us want to know the truth, the real truth behind all the BS. We learned early on that stories, especially old stories that we linked to ancient legends and myths, might have clues for us. I think that’s why I read and write.

The clues I’ve found, or think I’ve found, don’t make sense if I discuss them at the local Waffle House. People say, “Well, that’s just crazy.” I know it sounds crazy, but then that’s why I think it’s true. That’s the great paradox of living in this world, I suspect. The truth always sounds like it isn’t the truth.

Yet, we continue to believe that while reading and writing, we catch glimpses of the truth. So, we keep on playing our games with words. It’s like a journey into the unknown. When I start reading or writing, I have no idea where I’ll end up. Yet, I see a pattern to what I’m doing as I read books with a common theme that support each other and as I write books with common themes that support each other.

When people ask me why I write, I give them the short answer: “It beats driving a truck.” The real answer is too difficult to pin down just as the real answer for why I read what I read is hard to fathom. What about you. Do you have a short (and true) answer for why you read an/or write? 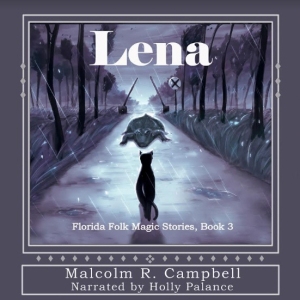 Malcolm R. Campbell is the author of “Lena.”