White Birds in a Nest (Macbridea alba) is a threatened Florida wildflower in the mint family that is found in the panhandle. It favors pine woods and savannas in environments that require periodic fires that manage the ecosystem. Years ago, somebody said the flowers reminded them of birds eggs or the heads of baby birds, and the notion became its common name.

Fire suppression–rather than letting natural and necessary burns take place–has played havoc with this plant along with many others in longleaf pine environments. It depends of bumblebees for pollination, and those are in decline. And then, too, there’s always the land’s old enemy development which takes its toll. Pesticides and pastures are among the usual suspects.

When I was growing up in Florida, these plants were much more common than they are now. I mention them in my 1950s-era folk magic crime novels because they were very much a part of the characters’ environment, a part of the wild flower display you can see along state highway 65 between Eastpoint on the Gulf coast north through the Apalachicola National Forest to SR 12 just west of Quincy. The flower can also be found in Alabama. The blooms stand out in their natural habitats between May and August. 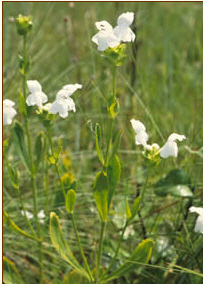 When people find these flowers in the wild, they often pick them, thinking they can take them home and display them in a vase. They’re too fragile for that and will probably wilt in the car on the way back to the house. The Forest Service, in Ethics and Native Plants, states that “For many of us a field of wildflowers is one of the most beautiful experiences we can encounter in Nature. There is a deep impulse we carry from childhood into adulthood to reach out and pick a flower in a beautiful butterfly-filled meadow or along a public wooded trail lined with spring beauties, irises, or wake-robins. It is because we all carry such memories that we have devoted an entire website to Celebrating Wildflowers. Millions of people visit the public lands each year and if only a small fraction of them each picked a few flowers, soon there would be none for the rest of us to enjoy.”

If you live in Florida or are visiting the state, you can see White Birds in a Nest in Bay, Gulf, Franklin, and Liberty counties. The Apalachicola National Forest has the most stable populations.

I find these flowers to be quite showy and hope we can preserve them via common sense and Forest Service preservation plans.

“Lena,” the final novel in Malcolm’s Florida Folk Magic trilogy will be release by Thomas-Jacob Publishing on August 1.

2 thoughts on “Florida Wildflowers: White Birds in a Nest”