Should old knowledge be forgotten as my Gàidhlig title asks or as we are asking when we sing “Auld Lang Syne”?

I take comfort in this old song, perhaps from my Scots heritage, perhaps from the sweet sentiments set down by Rabbie Burns in 1788. When I think of him, I am saddened by the fact he was only with us for 37 years. But what a great influence he was.

I was very much aware of him as a child, and when we were asked in a high school class to memorize a poem and recite it to the class, I chose his “Scots Wha Hae” (Scots Who Have) about William Wallace, doing my fair best with the dialect:

I’ll no fash you by copying in the entire poem!

My father knew Scots history and the particulars of our family tree, so I grew up filled with stories about everyone who opposed the English threat to the sovereign kingdom, especially the Highlands. I feel like I’ve been waiting for Scotland to break away from Britain ever since the sorry Acts of Union in 1707.

And surely ye’ll be your pint-stoup!
and surely I’ll be mine!
And we’ll tak’ a cup o’ kindness yet,
for auld lang syne.

We twa hae run about the braes,
and pou’d the gowans fine;
But we’ve wander’d mony a weary fit,
sin’ auld lang syne.

We twa hae paidl’d in the burn,
frae morning sun till dine;
But seas between us braid hae roar’d
sin’ auld lang syne.

And there’s a hand, my trusty fiere!
and gie’s a hand o’ thine!
And we’ll tak’ a right gude-willie waught,
for auld lang syne.

I’ve been going ’round and ’round with a few people on Facebook who believe New Year’s Eve marks the beginning of a new decade. I say it doesn’t. They say it does. But, no matter.

Whatever is being marked by New Year’s Eve can be marked with a symbolic step toward your hopes for 2020.

My symbolic step was to open a doc file containing the first two chapters of a novel I’ve been blocked on for the better part of the year. My symbolic step was writing a new beginning. Now, my mind sees the book as underway again rather than stalled.

I still don’t know whether my radiation and hormone treatments got rid of the cancer. Tests near the end of January may give me a clue. But using a Cancer Navigators program called iThrive, I’ve taken steps to improve my diet, my supplements, and other things that should have a positive effect on my health.

Perhaps most of us are in this boat at the end of a calendar year with plans for the texture and ambience of the following year. Affirmations work best when we take symbolic steps to jump-start them. Those who want to quit smoking, throw out their last cigarette. Those who want to quit drinking “too much,” throw away the last inch in a bottle of booze. There are a hundred ways, perhaps a million ways, to add power to the affirmations we’re making for tomorrow.

They need not be earthshaking because small steps can lead to large results. Whatever your hopes are for 2020, I hope you realize them.

“Good resolutions are simply checks that men draw on a bank where they have no account.” – Oscar Wilde

If you are driving along a wilderness highway and approach a bridge with a sign that says, “80% of the cars trying to cross this bridge will fall off,” would you drive across the bridge?

Most people will probably say “no.” Ironically, nearly all of those people who say “no” make New Year’s resolutions even though (according to this study) 80% of these resolutions will fail. 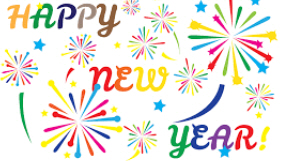 Experts (whoever the hell they are) say that we make resolutions because we feel guilty for being naughty during the holidays when we ate too much, drank too much, slept around too much, and stole too many of our kids’ presents out from under the tree.

She tended to think resolutions were an all talk, no action way of life. While it’s easy in the middle of a hangover from hell to blurt out, “With God as my witness, I’me never going to drink again,” it’s sheer vanity to stand up in front of a bunch of your best friends and say, “In 2018, I will be kind to my fine feathered friends because they might be somebody’s mother.” Everybody applauds, and thinks, “wow, what a saint.”

If you’re lucky, none of those people will be around when you take your 12-gauge shotgun out to the duck blind and shoot a lot of Mallards out of the sky for dinner.

Like Mama, I think resolutions are just showing off. Many are probably made because people are staring at you expecting you to reform or because you’re drunk and don’t know any better or because Mr. Jones caught you sleeping with Mrs. Jones whereupon you thought it best to say, “Oops, wrong bedroom, but rest assured I’ll never do this again.”

Some resolutions may have a dash of merit, as in Jame’s Agate’s “New Year’s Resolution: To tolerate fools more gladly, provided this does not encourage them to take up more of my time.” I like Marlene Dietrich’s “I resolve always to be myself, and not to let them influence me!”

Basically, most of us are who we are and, in spite of a few complaints, we’re comfortable with that. No wonder we fail on January 1st when we tell a bunch of drunks at a party, “I’m going to stop being who I am.”

I grew up thinking that most of what I did wasn’t any of Mama’s business. If I made a New Year’s resolution, I didn’t tell anybody about it, least of all her. If it failed, well, no problem, it only had a 20% chance of succeeding anyway. If it succeeded, people thought I was simply walking the straight and narrow more often than before.

It wouldn’t be a vanity thing, you understand.

Otherwise, I tend to be fairly comfortable with my faults as well as my strengths. Being superstitious, I worry that if I got rid of a fault, I’d crash and burn somehow because it was sustaining me more than I knew.

So, I have no resolutions for 2018 because I don’t want to get rid of anything that seems wrong but that’s actually working. Maybe some of the so-called positive things about me are ruining my life. Needless to say, it’s best not to tamper with the way things are.

If pressured by drunks at a party, I always have a few resolutions handy. I resolve to stop running with scissors. I resolve to wear clean underwear when I leave the house. I’m going to stop brushing my teeth with Sani-Flush. I resolve not to sleep with Mrs. Jones if Mr. Jones is in town.

“The idea that time is an illusion is an old one, predating any Times Square ball drop or champagne celebrations. It reaches back to the days of Heraclitus and Parmenides, pre-Socratic thinkers who are staples of introductory philosophy courses. Heraclitus argued that the primary feature of the universe is that it is always changing. Parmenides, foreshadowing Einstein, countered by suggesting that there was no such thing as change. Put into modern language, Parmenides believed the universe is the set of all moments at once. The entire history of the universe simply is.”

– Smithsonian in “What Does ‘Happy New Year’ Really Mean?

It remains fashionable to kiss somebody, have a drink and say “Happy New Year” wherever (and possibly whenever) we may be when midnight occurs in our time zone.

We don’t concerns ourselves unless we’re really drunk or excessively sober and alone at that magic moment that people in some parts on the word said “Happy New Year” hours ago or that other people have yet to say it.

As a writer of fantasy and magical realism, I believe it’s my duty to say yes, Mr. Einstein, time does not exist. The appearance of time is convenient. But beyond that appearance everything is simply now.

So, you see that as long as I claim time is an illusion, I don’t have to get drunk at midnight on New Year’s Eve or, worse yet, look at all the things I didn’t get around to this “past” year and resolve with much fanfare to do them “this coming” year.

I realize that one can use the “time is an illusion” philosophy as an excuse for variously not planning ahead or for forgetting the “past,” much less showing up anywhere on time. Likewise, one doesn’t have to believe that time flies, that the “past” is over and done with or that there’s any reason to plan for the “future.”

Whichever side of the time debate we choose, we’ll always have all the rationalizations we need for doing whatever we like. That’s the beauty of these questions. They remain cryptic and mysterious and (possibly) filled with doubletalk. Maybe we really are, as the movie said, going back to the future. Maybe people who are said to be living in the past really are very forward-looking folks. Nonetheless, the “eternal now” remains illusive.

That said, best wishes for a Happy New Year even though such a thing might already be past history.

Malcolm R. Campbell is the author of contemporary fantasy novels and paranormal short stories which may or may not exist in your time zone depending your belief system.