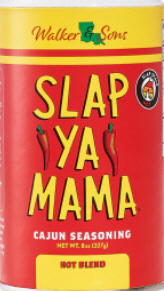 Junction City Texas, April 19, 2022, Star-Gazer News Service–Joe Smith was arrested here today for slapping his mama silly while cooking up a frying pan of dirty rice with a tablespoon of hot blend Slap Ya Mama™ cajun seasoning for extra excitement.

According to police, Smith’s Cajun cookbook included a potentially apocryphal story that the seasoning sold by the Walker family of Ville Platte, Louisiana, made food so good you were supposed to slap your mama for never cooking anything that great.

According to the Walker Family, Anthony “TW” Walker (who invented the blend) has never slapped his mama, never even considered it. In reality, according to TW, ”When you use this seasoning, the food tastes so good, you’ll receive a loving slap on the back and a kiss on the cheek for creating such a great tasting Cajun dish.”

Smith’s attorney, Aurelie Jones said that Smith missed the memo and/or the footnote in the recipe about mama slapping.

“I thought I had to slap my mama just after mincing the chicken gizzards or the recipe wouldn’t work,” said Smith. “That mojo was the conjure behind the cooking.”

Smith’s father, Wesson, said that if his boy had been cooking Slap Yo’ Daddy BBQ, his son would be in the morgue because “Nobody slaps me and gets away with it. My wife Irene thinks the dirty rice faux pas was kind of funny after she iced down her face.”

The family is pressing assault and battery charges to “teach Joe a lesson.”

Jones told reporters that the dirty rice was spectacular, “though not worth jail time.”

2 thoughts on “Man arrested for slapping his mama”