If you celebrate, or give Valentine’s Day, I hope it’s everything you hoped it would be whether you spend $10000000000000 at your favorite spa/hotel/restaurant or buy a cheap card for your significant other from CVS. 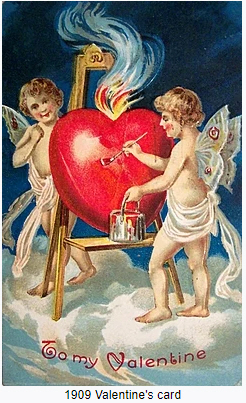 The holiday began as a pagan holiday (Lupercalia, a Roman Festival dedicated to fertility) like many of the year’s other celebrations. I’m okay with that. I often think the pagan folks of yore had the most realistic take on what love and life are all about.

I read an article somewhere today that said Americans are getting together, having sex, becoming parents and bothering with Valentine’s Day less than ever. If the U.S. fails, it will probably be because of such a low number of rolls in the hay we no longer have enough children to look after us when we’re old and grey.

And yet, I’n encouraged by the fact that fewer people are sending e-mails and text messages these days that lazily say, Happy VD. Excuse me, is VD something we want to celebrate?

After leaving a liberty port, navy ships used to have a VD line that snaked halfway through the boat to sick bay where a lot of people got a lot of penicillin. Fortunately, you don’t see those kinds of lines at CVS or the local urgent care “doc-in-a-box facilities” on February 15th and 16th.

I did notice at the grocery store this morning that a lot of people (not just guys) were buying flowers, cards, and Valentine’s Day balloons. That’s a good sign, ya think?

Of course, St. Valentine was a martyr. That alone should make us pause and ask whether love and all that stuff are worth the risks. I’m not sure. How about you?