When I walk through a forest, I really do want to know what kinds of trees I’m seeing. I’d think visitors to national parks and other scenic areas with trails and trailguides would like to know what, too. Apparently the trailguide publishers don’t think so. 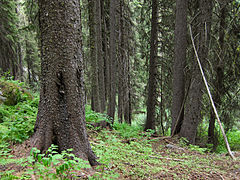 hiker looking for things to do.

The online guides usually include directions to the trail, how long and difficult it is, what to take (water, bear spray, food), and include photographs of the mountains, lakes, and valleys. Those made by amateurs (who may be strong hikers) don’t mention the names of the mountains in the views because they probably don’t know what they are. The same is often true for the lakes.

As for the trees, no mention of them except, perhaps, to say, that a trail begins in a forest. It wouldn’t really be that hard to say Engelmann spruce forest (as shown in the photo) would it? The showier, well-known wildflowers get mentioned; the rest are simply called, well, meadows of flowers. I really wish more people who know the flora, fauna, and landforms would make these guides to they can give prospective hikers the complete picture.

Otherwise, those using the trailguides won’t know what they have seen after they get back from the hike.

Malcolm R. Campbell was one of the editors of the first editions of “Place Names in Glacier National Park” and “Geology Along Going-to-the-Sun Road.” His novels set in the park include “The Sun Singer.”