The title of this blog is one of the more provacative statements made by Carolyn Elliott in her exhillarating 2020 book Existential Kink. 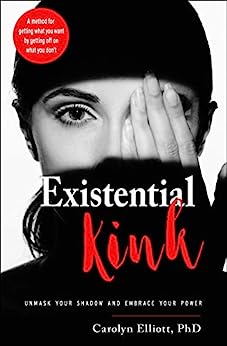 It’s tempting to respond, “Oh yeah, well then who the hell am I?”

Students of metaphysics, medicine, psychology, philsophy, and new age ideals–among others–have pondered the who am I really question for years. I don’t really feel competent to write a review of Elliott’s book here. She draws on a lot of areas, many of which we have stumbled across but never put together into a coherent system, about why we aren’t who we think we are and why our positive affirmations don’t seem to work.

One key is that we are more than our ego (in terms of ego, superego, and Id) and that the ego tends to ignore the unconscious part of the Self as though it’s either unimportant or doesn’t exist. So, from Elliott’s perspective–which agrees with Carl Jung–who we really are includes the part of ourselves we tend to deny. When we do this, the unconscious part of ourselves is actually running the show, that is to say, (in Jung’s terms) the shadow.

The answer, which appears counterinitutive, is integrating the Self rather than denying/disliking most of it. I leave that idea here as something to ponder. Jung says that the part your Self that you don’t include in your conscious approach to life will come upon you a fate. Elliott mentions that the whole Self always gets what it wants and that much of what we do in our daily lives amounts to magic we don’t realize we’re practicing.

Personally, I think I need to keep studying her book (or else).

My novel “The Sun Singer” is a hero’s journey book, one means of integrating the Self.