Informed spokesmen said that the proposed new slogan for the U.S. Postal Service will be: “When it absolutely doesn’t have to get there at all.” 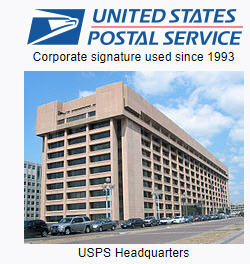 According to Program Manager Bob Smith, “The expensive new processing equipment and other advanced technology aren’t expected to improve first-class mail or package delivery times as much as they will impress school children and others taking tours of postal facilities.

In a white paper released via PRNEWSWIRE, the watchdog group Just Waiting for the Mail said that the planned new uniforms will improve the “cuteness factor” for those thinking about making the USPS a number one career choice. The uniforms’ specifications include upgraded spud guns for controlling dogs, and possibly Democrats, that hassle delivery personnel.

Smith smiled when he said, “We are proud to embrace the term ‘snail mail,’ and promise to do our best to live up to that expectation of our services.”

A new mail slot in re-designed post offices will be named “Feeling Lucky.” Most mail inserted through that slot will fall into a trashcan while a “modest number” will be sent via priority mail even though such mail is no longer a priority.