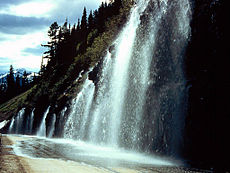 If you’ve driven along Going to the Sun Road in Glacier National Park–or taken a red bus tour–you probably saw The Weeping Wall. If you’re in a red bus and the top is down, you’ll get a bit wet early in the season when the water looks like it does in this Wikipedia photo.

The rock behind the water is the Siyeh Formation. It tends to have a khaki color. Like most of the rock in the park, Siyeh (often called Helena) is sedimentary, beginning its life at the bottom of an ancient sea during the Proterozoic age over 800 million years ago. In Blackfeet, Siyeh (Sáiyi) means Mad Wolf and is the name of a creek, pass, and mountain. It’s made of limestone and dolomite.

I have changed the name of my novel-in-progress from Aeon (too obscure) to The Weeping Wall. Even those who have never visited Glacier National Park will get a sense of the novel from that title–I hope.

As with previous novels set in the park, this one will be as accurate as I can make it in terms of the location and its features. This is one of those cases where it helps the writer to have been there–and got wet.