Irony reigns in these biting and ofttimes darkly humorous tales. Campbell invites us to ponder upon the common follies of his fellow man, highlighting such weaknesses as pride, selfishness, fear, and greed, and pointing out the further foolishness of ignoring such shortcomings. Allegorical in nature, this body of work challenges the reader to a closer look into their own frailties and deficiencies and invites him to a healthy dose of quiet introspection.

From the Foreword by Jay Beaman, PhD 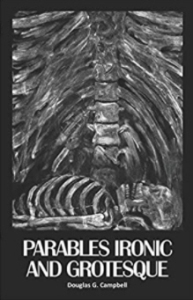 The irony of this artifact, this book, is the irony of how we communicate with each other in post-speak society. In the cyber-world, I can send off a message, and a few seconds later someone else speaks back to me or at me with a tweet, but usually there is a time interval between parts of the same message. Alexander Graham Bell’s first message on the telephone, “Mr. Watson –come here- I want to see you,” was instantaneous and continuous. Cyber-communication is discontinuous, disjunctive, and in that sense ironic. Here we are just now getting around to reading a book by Doug Campbell, written when he was a great speaker, when his voice was in the moment, some years ago before his stroke. Given his current difficulty in saying words, it is ironic to read such prescient work written about our society. I hope to have lunch with Doug again in days, and our conversation will be halting, frustrating, even primitive. But here I read him with such thoughtful and deft clarity. Doug loves puns, like his painting of a frog workshop, titled “toad’s tools.” This book is filled with puns. I hope Doug will forgive me for my pun, quite in bad taste, but written with deepest empathy, I weep as I write it, that this book reads like “a stroke of genius.”

I won’t commit the faux pax of reviewing my brother’s book, though I have to say, I love puns, satire, and irony and find this collection (in those terms) a comforting read.