Or, possibly, you don’t think that because you weren’t yet born during the years 1964 to 1975 when Fleming was the host or you’ve just assumed that Alex Trebek has always been the host going back to the days when the Psalms were being written. 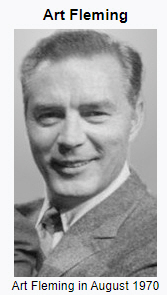 Actually, Laurence R. Campbell (my dad) was the first host of the show even though we never could find a network to pick it up. Word is, Merv Griffin created Jeopardy!  in 1964, and that’s true. What’s left out of the story if the fact that Merv stopped by our house in Florida for dinner when we were playing a spirited round of “Questions” (as we called it) around the dinner table.

We had a pot roast that day. And Parker House rolls. And Merv taking a lot of notes and phoning in ideas to the network brass. So, he went down in history as the originator of the show first called “What’s the Question?” and we didn’t even get into the credits.

Dad asked all the questions. They were random. My two brothers and I shouted out answers. Mother occasionally answered a question when it was obvious none of us knew the answer. There were no winners or losers. There were no prizes. Just a rollicking good time.

Dad was a university professor. It occurred to me that “Questions” was more than a good time. It was homeschooling before the term became popular and it was Jeopardy! before Art Fleming began the televised show as the host. The family watched Jeopardy! in those days, and we tuned in almost every night, but it was never quite the same as answering questions around the dinner table while eating pot roast and Parker House rolls.

For those of you who don’t know what Parker House rolls are, I’m sorry, but that information is classified.

Malcolm R. Campbell is the author of “Fate’s Arrows,” released a few days ago by Thomas-Jacob Publishing.