Uncle Hugo’s, the oldest independent science fiction and fantasy bookstore in the US founded in 1974, burned down during the recent riots protesting police brutality and racism in the wake of the shocking death of George Floyd during a police arrest in Minneapolis. 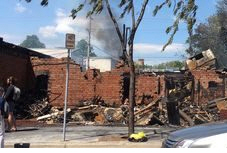 I suspect outside agitators rather than protesters did this. Apparently, no police were present. On TV shows, the cops find the perpetrators via recordings from traffic and security cameras. That probably won’t happen here or at any of the other stores looted or burnt and watched live by 24-hour news station viewers.

The irony, of course, is the number of black-owned businesses that have gone up in flames: not exactly a plus for the Black community is it?

The cities that allowed this destruction failed to protect the populace. Perhaps metro governments should pay for the peoples’ losses. On a hopeful note, this is a good sign: Donations to businesses destroyed by looters and rioters on Minneapolis’ Lake Street surpass $2M

2 thoughts on “Uncle Hugo’s Bookstore Destroyed in Riots – Will there be an apology or restitution?”