If you’ve been around a long time and used to watch the Tonight Show With Johnny Carson, you may remember that one of his recurring bits, when others were talking about going out on the town for an upscale night of partying or dining, was to sit at his desk with a woebegone expression and say he’d probably just go home alone and eat a cracker.

As for me, I’d rather stay at home than go to a party or (hell) a rock concert or any event with 1000000000 people and eat a cracker. My wife of almost 33 years (our anniversary is tomorrow) feels the same way. We have shelves full of books and old movies and know how to prepare comfort food that we usually prefer to a $100 meal. 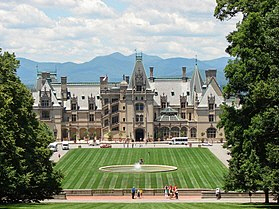 Now, had we known our favorite vacation spot (Biltmore) was going to announce today that it’s reopening its 8,000-acre estate in Asheville, NC, we might have bought a three-day pass. We’ve been going to Asheville regularly since we were married (if not before). So, we do come outside our house from time to time and go back to places we’ve come to know as comfort places. I did send off to Biltmore for Cardinal’s Crest, our favorite wine from their winery. Fortunately, it arrived today.

We have steak, pork chops, and ribs in the freezer, but seriously during our rainy days, getting out and cleaning up the old Weber grill isn’t very tempting. Don’t laugh: we’ll probably have a squash casserole or beef stew instead. (“Isn’t that just typical of old people,” our Facebook friends are saying.” My response is, “Hell, we ate like this 33 years ago.”)

If the space launch doesn’t get scrubbed due to bad weather, we’ll be watching that. Neither of us misses space shots, a habit we started before we knew each other. Since our regular TV shows are on hiatus, we’ve turned to the History Channel. We’ll finish up “Grant” this evening, but if they’re not lying to us, the previews have shown snippets of more cool stuff coming up. (“Yawn,” you say? My response is “Pshaw!)

I saw a link on Facebook today to an article that predicts kids are going to have a real depressing summer. My only response to that was if so, it’s due to a lack of imagination. Yeah, we went on family vacations and such things might now be possible this year, but even without them, we were seldom bored. Of course, my brothers and I played outside from dawn until dusk, and that was a lot more infinite in scope than the Internet or, God forbid, screaming in a swimming pool so filled with kids all you could do was, um, just stand there. Yawn.

Luckily, we grew up in the Florida Panhandle where are beaches weren’t screwed over by developers like the Peninsula part of the state. Our beaches were free and clear so we could enjoy them rather than share them with 10000000 other people who, when it comes down to it, are needless clutter.

But, I digress. As an introvert, I enjoy being quiet and going to quiet places. So staying at home and (figuratively!) eating a cracker is the cat’s pajamas. (Google that phrase if you’re too young to know what it means.)

Or, as Johnny Carson said, “Happiness is having a rare steak, a bottle of whiskey, and a dog to eat the rare steak.” Okay, we’re not quite that bad because we have cats and my wife doesn’t like Scotch. So, maybe happiness is a night at home with somebody you care for a whole lot.

2 thoughts on “As an introvert, I’ve found it easy to stay at home”