This novel is a breathtaking display of exuberant lyrical prose, wondrously detailed imagery, and elaborate plotting. Interlocking tales and snippets of tales comprise this brilliant celebration of storytellers and how the times and places and characters of their art become woven, often covertly, into readers’ lives. 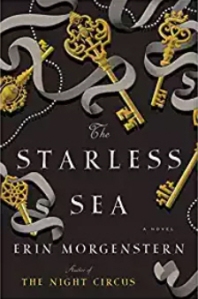 The purported protagonist, Vermont college student Zachary Ezra Rawlins, checks out a book called Sweet Sorrows from the library and finds within it a story from his childhood. At first, he can’t believe it, but then as he tries to find out where the book originated and how it was catalogued by the library, he discovers over time that he can’t truly believe anything.

Rawlins initially discovers that simply having the book has placed his life in danger. He’s not sure why. In fact, he may never be sure. As it turns out, there are doors everywhere that lead to an immense and seemingly infinite realm of books stored in ever-shifting below-ground castles and caverns.

One is reminded of Neil Gaiman’s Neverwhere tale about a hidden-away realm beneath the streets of London where the culture is quite different from everything at street level. In Morganstern’s unique world, which comes with its own mythologies and origin stories, the culture is not only different from the “real life” we know, but changes constantly like the play of moonlight on the surface of the sea.

Stories are not content to confine themselves to their original plots. Instead, they update and morph themselves not only into other stories but into the reality of the inhabitants and structures of the underground world itself. In one respect it’s chaos, but everything is tied together as though the stories themselves got together and made sure their changes meshed perfectly with the changes in other stories like the gears in a perfectly designed machine.

The stories, in fact, are all there is. They are not only the motive power and intelligence behind the underground library on the shore of the Starless Sea but impact the direction of the science and technology world that innocently exists outside the doors leading into the depths.

In defense of readers who enjoyed The Night Circus and were disappointed with The Starless Sea, Morgenstern’s new novel strays dangerously close to being a work of experimental fiction rather than a true fantasy. The plot isn’t linear and may not even exist cohesively from one chapter to the next. The ending–which works perfectly within the confines of the novel–will anger those who read through some 500 pages hoping for a resolution.

I’m content simply to experience the world Morgenstern has created in The Starless Sea and the immeasurable beauty of her storytelling.