I remember the Hallowe’en of my childhood when most people remembered that it’s a contraction for hallowed evening and left the apostrophe where it belongs. Kids, except for the very youngest, went around the neighborhood alone or in groups rather than going from street to street in a parent’s car (that would creep along while the kids rang doorbells). I remember when Hallowe’en was always celebrated on the 31st rather than being moved by law or proclamation by the city council to the nearest weekend day. And, I remember when a lot of kids saw it as a night to go out trickin’, which meant throwing eggs, tossing toilet paper up in the trees and messing up windows and screen by drawing on them with bars of soap. 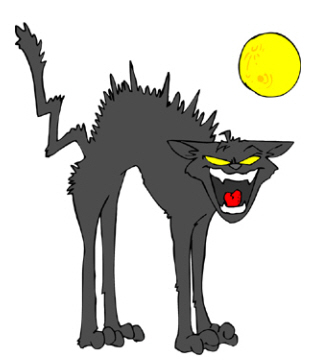 I suppose when you’re my age (you’ll know it when you get there), you’ll remember Hallowe’en as it is now instead of what it will probably turn into: banned or structured into Hallowe’en walks through selected parts of the town. It’s sad, I guess that progress has been forced to focus more and more on the predators that appear on the streets every year. Hell, you can go to jail if you allow your kid to walk or ride a bike to school.

When I was a kid, we’d have a hundred or maybe a hundred and fifty trick-or-treaters a night–often more. When we lived in a small town on the other side of Georgia, we were surprised if we had fifty–that, in spite of the pickup trucks bring in kids from neighborhoods far away. Now we live on a rural road and haven’t seen a trick-or-treater for five years.

When I was a kid, I thought Hallowe’en was fun. I suppose it was the candy and, to some extent, the costumes. As I got older, I hated it because I had better things to do than jump up from whatever I was doing every five to ten minutes to answer the doorbell and hand out candy. But, that was only fair since I rang a lot of doorbells and disrupted the evenings of a lot of adults when I was little.

I liked the little kids best since they were shy or joyful. I disliked the teenagers who thought they were entitled to all the candy in my basket and to hell with whoever came to my door after they left. I was proud of the African American and Korean [Korean is Georgia’s second language] parents who were brave enough to bring their children to a predominantly white neighborhood. I tended to be somewhat cranky with people who thought it was okay to ring my doorbell after 10 p.m.

And that reminds me, why is it now a standard to remove the periods from the “p. m.”? More lazy English, I think. But I refuse to change. I’m going to keep putting those periods there for the same reason I keep putting the hyphen in co-operation. (That hyphen had a purpose: it told you that “coop” wasn’t pronounced like a chicken coop but as two syllables.)

2 thoughts on “Happy Hallowe’en (or else)”