I first met bestselling military history novelist Jeff Shaara when he was a teenager, though there’s no reason he would remember it. His father, the Pulitzer Prize-winning author of The Killer Angels (made into the movie Gettysburg) was my creative writing teacher at Florida State University. We met at Mike’s house once a week. His wife, Helen, prepared a smorgasbord for us to consume during the class break. Jeff spent the evening (or so it seemed) hovering around the dining room table. 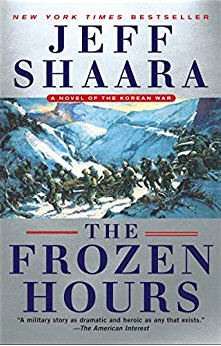 nasmuch as I am a pacifist, people find it odd that I often read military history novels. I do this because they teach me more history than I learned in high school and college history classes. Authors such as Shaara (both Mike and Jeff) and Philip Lee Williams whose outstanding Civil War novel A Distant Flame was the winner of the 2004 Michael Shaara Prize, do a tremenous amount of research and then wrap their findings into compelling stories, and readers benefit from it.

Williams told me that while creating A Distant Flame, he created an hourly timeline of the battle of Atlanta to keep his facts straight. I’m sure Jeff Shaara does the same thing because his works are flawless. And, suffice it to say, Jeff is prolific:

His next novel is about Pearl Harbor. I will definitely be reading it after buying The Frozen Hours about the Korean War, a war that was ongoing when I was in grade school and often in the headlines then.

I appreciate these novels because I learn so much about our history from each one of them.

Malcolm R, Campbell is the author of the Vietnam war novel “At Sea.” The novel is a personal story of one man’s service in the navy during the war and not military fiction.