All you have to do is write it.

As I search for writing-related articles to post on my Facebook author’s page, I see a fair number about writing memoirs. More and more of these of late have suggested that so-called “everyday people” should be writing memoirs–not just the rich and famous, not just those who have lived through wondrous or horrifying experiences, and not just those whose lives have intertwined with widely known people.

If I may be so bold as to suggest: your story is the life you are living. You’ve had good luck and bad luck, made good decisions and bad decisions and learned a lot of things in the process. What changed you the most: the so-called “good” or the so-called “bad.” In fiction, “bad” is often more compelling than “good” whether it’s bad people doing bad things or good people fighting bad people.

Whatever we discover in this chaotic mix of “bad” and “good” is worth saving, if not for the world at large, but for our families and friends. It need not be a hardcover or a paperback or an e-book available on Amazon. Perhaps it’s a folder of printed out pages or a series of files on a flash drive. (I prefer the printout because twenty or thirty years from now, there might not be any hardware or software around than can read a flash drive.) 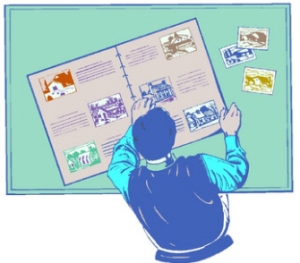 I have two granddaughters who are much too young to hear the story of my life. When they’re older, it might be interesting. Or, it might not. Maybe my story will found like ancient history to them and whether it does or doesn’t they might have fun reading it. One of my aunts lived to be over 100 years old. She told me stories about traveling across the country in a covered wagon from Iowa to Washington state. Her stories made history come alive and made my family’s past more vital.

I found my family stories to be interesting, and it never occurred to me that my parents and grandparents were sharing them with me out of a sense of vanity. Yet, many of us feel like we’re being vain when we try to write our stories whether we sound more like heroes or villains. Even when I was young and tried to keep a journal, I realized I couldn’t write it straight and that I was always writing it with a bias that made me look less screwed up than I was. So, I know it’s hard to get past that need to justify ourselves and just tell the story has it happened, warts and all.

Most of us don’t have Wikipedia entries our kids can Google in the future. If we live in a Walton’s-like environment in one big house, we can share a lot of stories over time. When families are scattered, this is harder to do. We used to write snail mail letters to each other, but that’s not part of today’s reality–and even when we did write them, we usually didn’t save them to read again twenty years later. My parents wrote an annual Christmas letter, a process that has become much maligned. Yet my copies of it remind me what I was doing at different ages. One joke about Christmas letters was that they told the good stuff and not the bad stuff. Which is not to say that when and if you write the story of your life, you have to disclose every embarrassing moment. Our memoirs need not be a “Mommie Dearest” kind of thing.

My younger brother has scanned in multiple family letters and documents and figured out our genealogy from my father’s earlier research and from sites like Ancestry.com. Personally, I find it tedious to read letters my mother wrote to her parents in the 1940s. If we write memoirs, perhaps we should summarize this kind of information rather than trying to include a minute-by-minute account of each day’s minutiae. Maybe less is more in some cases. Perhaps sketches of our teenage years are more likely to be read than doctoral dissertations with footnotes. <g>

Here’s a page on a memoir-oriented site that lists books that might be of help if you decide to take the plunge.

4 thoughts on “Your story is waiting to be told”