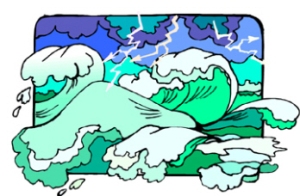 At this morning’s press conference, EPA Deputy Manager of Oceans, Leilani Moana reported that while the agency has not reversed its position about the unreality of climate change and related rising sea levels, it recognizes that small, short term climate anomalies are causing a public panic about the future of states like Hawai’i and Florida.

“Since the EPA feels your pain,” Moana said, “our top scientists and engineers  have devised a system of pumping stations, pipelines, and aqueducts to remove water from coastal areas and store it inland until it can be safely released.”

Some of the pumping stations would be tied into desalinization plants that would reduce the pressure on river systems for potable freshwater during times of drought.

According to a NASA white paper, launching water into the sun on Saturn V rockets would be cost-prohibitive even though some experts said such a program would cool the sun slightly, allowing Arctic glaciers to reform to help stabilize sea levels.

“The world’s excess heat is primarily caused by heated arguments about climate change that are turning the entire issue into a self-fulfilling prophecy,” Moana said. She added that groups claiming that the weight of the water in the cisterns would push the U.S. deeper into the ocean are unfounded.

Scientists told reporters this morning that the water held in the cisterns would always remain available to be pumped back into the oceans should weather anomalies ever decrease sea levels to the point where cruise ships were scraping bottom trying to get in and out of popular tourist destination ports.

“The Earth’s water supply is a closed system,” said EPA Chief Oceanographer Porter “Po” Seidon. “The water we have is all the water we have. All we’re doing is improving upon the Creator’s design to better manage that water in times of weird high temperatures or weird low temperatures.”

“We think we’ll have the system up and running before we lose southern Florida,” Moana said.