The Florida Panhandle, an informal, unofficial term for the northwestern part of the U.S. state of Florida, is a strip of land roughly 200 miles long and 50 to 100 miles wide (320 km by 80 to 160 km), lying between Alabama on the north and the west, Georgia also on the north, and the Gulf of Mexico to the south. Its eastern boundary is arbitrarily defined. – Wikipedia

The panhandle is often viewed as more like Georgia than the peninsula part of the state. Panhandle residents often think the peninsula with its tourist attractions has been ruined by overdevelopment and destinations that either don’t belong there or are caricatures of the once wild land they displaced.

The Panhandle features white sandy beaches, often called The Redneck Riviera, but now generally in advertising and promotion are referenced as “The Emerald Coast.” 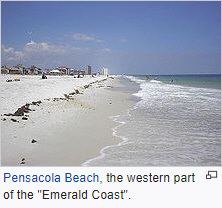 If you sample the beaches of the Emerald Coast and the Atlantic Coast, you’ll notice that most of the Emerald Coast isn’t covered with the kind of excessive development such as that found around Daytona Beach and other cities. (Gosh, I hope I don’t sound biased.) You’ll also notice the sand, is pure white, in fact blindingly white making sunglasses highly desirable. This sand is much different than the coarser sand of the Atlantic Coast.

According to Wikipedia, “The Apalachicola River /æpəlætʃɪˈkoʊlə/ is a river, approximately 112 mi (180 km) long in the State of Florida. The river’s large watershed, known as the ACF River Basin, drains an area of approximately 19,500 square miles (50,505 km2) into the Gulf of Mexico. The distance to its farthest head waters in northeast Georgia is approximately 500 miles (800 km). Its name comes from the Apalachicola people, who used to live along the river.”

The river is not only a recreation spot, but highly important in the watershed’s environment as well as the oyster industry in the Gulf Coast town of Apalachicoa. Water usage of the river between Georgia and Florida has been under dispute for years, with Florida saying that Atlanta draws off too much water at Florida’s expense.

The area is under restoration to repair damages from the forest’s long-time usage by the a timber industry that logged out many of the older trees, disrupted natural waterflows throughout the region by constructing roads that served as dykes, and a rape the land style of forest management.

The logging industry also had very poor stewardship over the Panhandle’s once ubiquitous wiregrass and longleaf pine forsts, cutting out the old trees and either not replacing them or replacing cut areas with slash pines. Many native species have been threatened by this policy. The forest service was very slow to understand what Native Americans and early residents understood: longleaf pine forests need fire to survive. For years, fires were extinguished before natural processes could be completed.

These boats still exist, but I see the 1950s as the heyday of the cabin cruiser. Most of us knew somebody who owned one, and fortunately those people liked to cruise the rivers, head to obscure beaches, and visit the barrier islands (St. George Island and Dog Island).

The Garden of Eden was once a tourist attraction near the small town of Bristol with signs pointing to places where Biblical events purportedly occurred. A local minister worked out a rather complex theory that sought to prove this spot along the Apalachicola River was the real garden of Eden. The signs are gone now, though a Garden of Eden trail still exists. The unique habitat is managed by the Nature Conservancy as the Apalachicola Bluffs and Ravines Preserve.

The St. Joe Paper Company was a major economic player in the economy of the Florida Panhandle and probably the area’s largest landowner. Like the Florida East Coast Railway (the old Flagler system route to Key West), the company was owned by Dupont. The tracks that remain are now used by a shortline railroad (Apalachicola Northern) between Port St. Joe on the Gulf coast the town of Chattahoochee near the Georgia Border.

This is where I grew up. You can see the barrier islands just south of Carrabelle and Apalachicola. My friends and I sailed boats between beaches near the junction of highways 319 and 98 to those islands, and my scout troop camped there and in many spots in the Apalachicoa National Forest. The wildlife refuge near St. Marks was a favorite family day trip. My Florida Folk Magic Novels are set near the towns of Hosford and Telogia. The area is rich in history, myths, habitats, recreation, and experiences perfect for a kid growing up who loved being out doors more than indoors.