Carrabelle sits on the gulf coast in the Florida Panhandle and has three rivers running through it. I lived an hour away in Tallahassee from the first grade through college and loved those rivers,  Carrabelle River, Crooked River and Ochlockonee River. I also liked the unspoiled coast–still called the Forgotten Coast–and the nearby Tate’s Hell State Forest. Except for the unfortunate logging in Tate’s Hell, which is currently in recovery, the beaches, swamps and rivers were more pristine than those in the crowded peninsula section of the state.

Across the bay from Carrabelle is Dog Island. In the 1950s and 1960s, my Scout Troop often went camping there. My best friend and I went there by speed boat and sail boat to explore the dunes along its coast. The island remains sparsely developed while the nearby St. George Island has more traffic since it’s connected to the mainland by a bridge. I was against the bridge when it was being built, but they the state department of transportation didn’t ask me.

In addition to the great seafood and the well-publicized “world’s smallest police station,” visitors will enjoy Alligator Point, Carrabelle Beach, St. George Island State Park, Ochlockonee State Park, and the Ft. Gadsden Historic Site. Highway 98 is a scenic coastal road and highway 67 is a scenic route through state and national forests. With 1300 residents, Carrabelle is not crowded except on warm summer days when people drive down from Tallahassee to enjoy the beaches.

I figuratively traveled to Carrabelle last week while working on a new short story set there in the late 1960s. I wish it weren’t seven hours away from my home in northwest Georgia. I would have taken a fresh look at a place out of my childhood for hushpuppies and mullet–along with the ambiance. Called “Visiting Aunt Ruby,” my short story will be released on Kindle by Thomas-Jacob Publishing February 12 as part of our Stories from Tate’s Hell series. 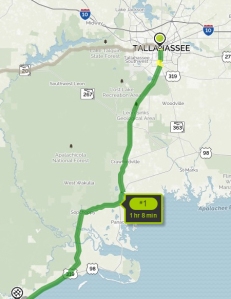 If you live closer to the gulf coast and haven’t been to Carrabelle, go take a look, and while you’re there, climb to the top of the Crooked River Lighthouse and explore the World War II museum at Camp Gordon Johnston.  If you dare to hike into Tate’s Hell and end up getting lost, don’t call me on your cell phone (if it even works there) and ask me how to get the hell out.

“The history of Dog Island and Carrabelle, Florida, includes a wonderful mix of Indians, shipping, bootlegging, logging and battles. This charming town was a fishing village prior to the Civil War, isolated from the rest of Franklin County by the lack of bridges and paved roads. After the war, it became an internationally known lumber town, shipping wood from the hundreds of thousands of acres of surrounding virgin forest. Turpentine, distilled from pine sap, was shipped via schooners from the natural deep water port on the Carrabelle River. ” – Get Hooked on Carrabelle

Malcolm R. Campbell is the author of “Conjure Woman’s Cat,” a 1950s-era novella set in the Florida Panhandle. It features a conjure woman who claims to be older than dirt, but not too old to fight the KKK when her town’s police force refuses to investigate the murder of a Black girl.

3 thoughts on “On location: Carrabelle, Florida”