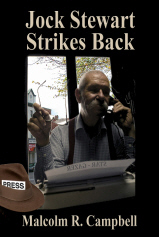 The book contains farcical and satirical news stories written by “Jock Stewart,” a reporter for the Junction City, Texas Star-Gazer. Here’s an excerpt:

Pinnacle, MT—Forensic literary sleuths digging through the long lost ashes of a Jane Austen notebook have discovered that a publisher’s typography error forever changed the title of the witty satire incorrectly known as Pride and Prejudice.

Dr. Horace Wickam, chairman of the department of forensic literature at Slippery Slope College, told reporters that correcting Austen’s body of work will most likely be the pinnacle of his career.

“The novel we have known and loved as Pride and Prejudice was initially called First Impressions,” Wickam said. “But according to Jane’s reassembled ashes, a typographer inadvertently changed the word in the new title from ‘prude’ to ‘pride.’”

Graduate assistant Judy Netherfield said that while foul play was not yet suspected it was not yet ruled out.

According to Wickam, the error in the title was compounded, and therefore obscured, by the fact that a crucial line of dialogue was omitted from a conversation in chapter four between protagonist
Elizabeth Bennet and her sister Jane.

Elizabeth’s reassembled comment reads as, “Dear Jane, you see, don’t you, that prudes are the most prejudiced creatures in the world because they are so afraid the next person they see will say the very thing they’re most afraid of hearing.”

Professor Darcy, chairman of the Slippery Slope department of psychic psychology, told reporters that two students working with a digital Ouija board contacted Ms. Austen who confirmed the veracity of the discovery.

“Ms. Austen, who always thought prudes to be disagreeable, remains perturbed to this day about the errors in Prude and Prejudice,” said Darcy. “Austen admitted, via the Ouija board, ‘I to not want people to be very agreeable, as it saves me from liking them a great deal.’”

London scholar Edward Bingley, who has been working for 20 years on his epic What Jane Really Meant, said that since he continues to be denied access to the digital Ouija board at Slippery Slope, he doesn’t yet know what Jane really meant.

Wickam said, “as the novel illustrates in matters of love, when you have an empty-headed mother trying to expediently marry off her five daughters, prude goeth before the fall.”

Future projects on the department of forensic literature department’s 2006 schedule include investigations of The Clown of the Baskervilles, The Adventures of Blackberry Finn and The Ruby Yacht of Omar Khayyam.