Washington, D.C. January 19, 2018, Star-Gazer News Service–Angry about the looming government shutdown, Congress passed a wordy new law that imposed strict limits on the number of words Representatives and Senators are allowed to use each year.

Called the “Sit Down and Shut the Hell Up Law” by supporters, the bill restricts all members of Congress to 10,000 words per year, with 5,000-word bonuses for each co-sponsored bill that actually becomes a law instead of getting “bogged down in squabbling.”

“This is a results-oriented law,” said Senator John Doe (Whig-Florida), “because it forces people who are not popes to stop pontificating at taxpayer expense.”

According to informed sources, Congress passed the legislation in a snit over years of gridlock and now they’re stuck with it.

“Most Senators are playing a ‘mum’s the word’ game with reporters because the new law was unclear about which words count and which don’t count in the annual tallies,” said John Doe’s chief of staff Sally Doe since her words are not limited by the law.

A whitepaper released by Acme, a Washington, D. C. think tank that emerged after ten years of thoughtlessness, said that a longitudinal study of lawmakers’ words and deeds showed that most Senators and Representatives “obfuscated the issues by talking out of both sides of their mouths at the same time.”

“The general public is paying high salaries with lavish benefits packages to these clowns (AKA Senators and Representatives) to help govern the nation, not to talk about governing the nation,” said Acme CEO Bill Smith. “We will have a safer, more-effectively managed country by issuing sticks and stones to lawmakers rather than providing a forum for endless ‘pick a little, talk a little’ debate.”

Word-counts will be posted daily in the Congressional Record, including the sources of the words, that is, speeches on the floor, committee debates, quotes given to reporters, leaks of all kinds, and notes scribbled on bar napkins.

“Abandon the idea that you are ever going to finish. Lose track of the 400 pages and write just one page for each day, it helps. Then when it gets finished, you are always surprised.” – John Steinbeck

Who knows, maybe counting words and pages helps you when you write. National Novel Writing month emphasizes speed, and that helps some people. Personally, I don’t like worrying about speed, the number of words I write in a day, or a “count down” of sorts about the number of words I have left to write before the story or novel is done. 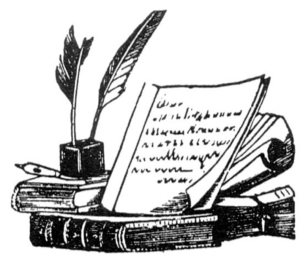 So naturally, I’m going to start this post with the quote from Steinbeck. If he were alive and well and writing in 2017, I suppose he’d say the same thing even though novels have gotten shorter and many authors are more prolific than the famous people we studied in high school and college literature classes.

Years ago when I was in high school, English teachers would give us classroom assignments in which we had to write an essay or a story with a minimum word count during the one-hour class period. Most students cared more about getting past that minimum word count more than they cared about style and substance. How do I know? We’d all write for a while with pencils on lined paper and then, suddenly, the silence would be broken by people using their pencils to count how many words they had so far. Tap tap tap tap tap, followed by a sigh or a groan if their work so far was well short of what they needed or a pleased smile if they had more than enough words down on the page.

Teachers always complained about this because the resulting work wasn’t cohesive. Sometimes it read well for a while, but then faltered when the student realized after lots of pencil tapping that s/he was twenty five words short of the minimum. So, more words were added, and they seldom fit because they were tacked on after the student thought s/he was done.

Novels can easily sound like that if we watch word counts too closely when we write. Sure, we know that novels are expected to be a certain length: maybe your genre needs 60,000 words or maybe it needs 100,000 words to fit what publishers expect. So, ultimately, you’ll need to know your word final word count. But you don’t need to know it every day. Well, of course you know it because–if you’re writing in Word, for example–the word count is displayed at the bottom of the screen.

Personally, I usually have a sense about a story from the beginning even though I never outline or know how it’s going to end when I start out. That sense is this: is the story long enough for a novel, novella, or short story? That way, I just tell the story and the number of words written at any given moment really doesn’t matter. Again (personally), I don’t like writing advice that suggests that I should complete a specific number of words/pages per day. I tend to write scenes from start to finish because that’s how I view the story. That might not work for you.

I guess I prefer the natural approach. When you’re sitting around a dinner table or at a bar swapping yarns, you just say what you need to say without worrying–half way through it–how long it is. You tell it until it’s done. Or maybe you tell the most important part of it until you’re done with that. You’d probably get tongue tied if somebody had a computer at the table counting your words, one with a gong or a buzzer on it if you used too many or didn’t use enough.

The tellers of tales have a sense, I think, about how long they can talk. If people ask for a story about the time you were on a sinking ship, you know you can talk longer than you might talk if you were telling a joke. And, unlike the writer alone at his/her computer, you can see the expressions on people’s faces and sense whether you’re losing them or keeping them interested. But mainly, you tell the story.

That seems to me to be more important than finishing the novel in a month or dutifully basing one’s writing schedule on completing 1,000 words every day. However, if you’ve been reading this blog for a while, you know that outlines, schedules, and deadlines bother me and that I think they are harmful to the story you’re writing. If they work for you, keep using them!

I want to concentrate on the story as it unfolds because that’s what works for me.