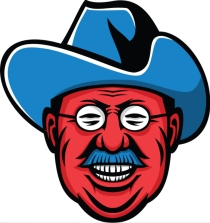 “In a car you’re always in a compartment, and because you’re used to it you don’t realize that through that car window everything you see is just more TV. You’re a passive observer and it is all moving by you boringly in a frame.

On a cycle the frame is gone. You’re completely in contact with it all. You’re in the scene, not just watching it anymore, and the sense of presence is overwhelming.”
― Robert M. Pirsig, Zen and the Art of Motorcycle Maintenance

Interstate highways accentuate the problem. They take you past the real territory whether it’s small towns with local character or countryside made up of differing ecosystems that all blend together outside the car window with the same unreality as the background in cheaply made theater/tv cartoons. Even the exits look alike, featuring the same chain gas stations, fast food restaurants, and hotels as the exits one saw five hundred miles ago.

I remember my first trip through the peninsula part of Florida. Looking back, the homespun roadside attractions all seem rather tacky and low grade when compared to the destinations everyone’s racing to see in and around Orlando or Tampa or Miami. All that homespun was real and very different from town to town when compared with today’s tourist destinations. Even now, I prefer the numbered U.S./State/County roads where one can experience the local cultures and local environments. I’d rather eat at Mom’s Diner than another Applebee’s or another Cracker Barrel.

Chain restaurants offer a bit of security, I guess. When you walk into an Applebee’s or a Cracker Barrel, you already know what you’re getting. With Mom’s Diner, you don’t. When a see chain restaurants, I think of the old Pete Seeger song “Little Boxes,” a slam against suburbia, and I think, yes, all these buildings are made of ticky tacky and look just the same.

When you race through Florida on I-4, I-10, I-75, and I-95, you’re really out of alignment with the territory and can no longer say (obviously) that the journey is more important than the destination. Using the contents page of one of my favorite books about Florida’s wetlands, when you travel an Interstate you don’t see, much less differentiate, between seepage wetlands, interior marshes, interior swamps, coastal intertidal zones, and mangrove swamps. Likewise, hardwood hammocks, pine flatwoods, and savannahs fly past your car window (like TV) at a mile a minute.

I see that Disney World and other theme parks are raising prices again. So, there goes a hell of a lot of money, long lines, crowds of people bumping into each other, submerged within Orlando’s ticky-tacky sprawl, and then home again via Delta Airlines or the Interstate. Missing from this experience is, of course, the real Florida. You missed the whole thing except for the so-called Magic Kingdom that features everything but real magic.

I’ll admit that when my daughter was little, we took her to see Seaworld and Disney World. And we recently went back again with her family so that my granddaughters could see the best of the best at Universal and Disney. Yes, we had fun. Probably, the kids had even more fun. I hope the kids will grow up and discover the real Florida someday, that is to say, a beach other than Daytona with its crowds and condos and hotels, the real magic of grasses, wildflowers and trees in one of the state’s diverse environments.

Campbell’s contemporary fantasy novel “The Sun Singer” is free this weekend of Kindle.

According to Being in the Shadow, 39% of the people in the United States live within 300 miles of the eclipse. We’re well within that distance of scaring ourselves by the fast-moving moon shadow racing across the sunny (hopefully) sky, so we’re going. Our trip to the North Carolina mountain rental cabin where eight of us will meet is only 188 miles,–according to MapQuest, that’s three and a half hours on the road.

We’re arriving at the cabin several days in advance because if all Americans within 300 miles decide to travel to a great viewing location, that’s 127 million people on the road. So far, we’ve seen estimates for north Georgia of about 60,000 extra cars on the road.

This is the post-eclipse estimate of people streaming back toward Atlanta minutes after the totality period is over. I-85 backs up every Thanksgiving, so–even if we still lived in an Atlanta suburb–we’d travel on a different day. That’s the good thing about being officially retired and working at home: we don’t have to rush back to work.

Initially, my attitude about driving so see the eclipse was kind of “ho hum.” I maintained that I saw eclipse conditions every night after it got dark. Nobody else in the family bought this. We have the shortest drive. Four people are coming from Maryland and two are coming from central Florida. It will be fun getting together in a cabin where we have plenty of room. Of course, as soon as we get there, we’ll check out how much sky is visible from the cabin’s deck.

We’re getting ready to go. We have our approved eclipse glasses (the cops say don’t wear them while driving). The car has new tires and a recent oil change. We have somebody coming by the house here in NW Georgia to check on our cats. We have extra wine.  We have dinner reservations on eclipse day, compliments of my wife’s tireless planning efforts. And we have a nice list of places to go and things to see while the eclipse isn’t happening–depending on traffic. As for pictures, I’ll post some if I can capture anything that looks exciting other than the black rectangle.

What are your plans? If you don’t live along the eclipse track, are you giving there?

Every year thousands of people enjoy the views from Glacier National Park’s engineering marvel known as the Going-to-the-Sun Road. Whether you’re looking at the scenery from the seat of your bicycle, a red tour bus or your car, the trip from St. Mary’s to Lake McDonald provides some of the best high country ambiance in the Rocky Mountains.

Up close and personal, you will notice the rock formations. They are stunning and colorful but, unless you have a good tour guide or a handy reference book, the geology on display may remain incomprehensible.

Geology Along Going-to-the-Sun Road, Glacier National Park, Montana will meet your needs perfectly. First published by the Glacier Association in 1983, this practical, well-illustrated guidebook has met the test of time. The book is organized into twenty-one stops from east to west along Sun Road that illustrate many of the park’s geological features.


The book includes color photographs of both the far-away and the close-up features. For example, you can compare what you see when you look at Curly Bear Mountain 3.9 miles from the entrance station with a diagrammed photograph that illustrates the mountain’s visible rock formations.

Or, at Stop 5, “Grinnell Formation,” text and close-up photographs in the book help you better understand this colorful red rock. Logan Pass, Stop 10, at 6,680 offers excellent views of the horn-shaped mountains created by glaciation, including Clements Mountain (shown in the book).

In addition to the stops, the book includes a glossary, information about rock colors, a list of the park’s rock formations and a handy shaded relief map of the road. Written by geologists in a language intended for non-scientists, the guide adds to a visitor’s understanding and enjoyment of a highway that has thrilled millions of tourists since its completion in 1932.
–

—Malcolm R. Campbell, who worked as an editorial assistant for this Glacier Association book project, is the author of two novels partially set in the park, The Sun Singer and Garden of Heaven: an Odyssey.