Actually, nothing. . . unless you want it to. It’s a day of spiritual feminine energy that men took over and turned into a day of ominous superstitions.

A bit of online research brings you information such as this:

“Friday the 13th was considered a very powerful day to manifest, honor creativity, and to celebrate beauty, wisdom, and nourishment of the soul.” – “The Spiritual Significance of Friday the 13th”

And this: “Friday is also named after Freya, the goddess, and is represented by Venus. Venus is the epitome of feminine energy. Her energy joins us as we approach the weekend to remind us that it is important to rest, relax and play.” – “Friday 13th – A Powerfully Feminine Energy Day”

And yet, most people appear to accept the fact that there’s something “wrong” with Friday the Thirteenth.” The darned movie strengthened people’s fears but didn’t cause them. The movie’s plot reads like the scary stories we used to tell around the campfire on Boy Scout camping trips. The movie, I think, is best viewed on a dark and stormy Friday the Thirteenth when, if the force is against you, the power will go off and you’ll hear the serial killer in the basement waking up from his/her nap.

Apparently, “13” as an unlucky number comes out of a Norse myth and continues on via the number of people at The Last Supper. We compound the nonsense by having no floor 13 in high-rise buildings, and similar “precautions.”  Wikipedia informs us that “According to the Stress Management Center and Phobia Institute in Asheville, North Carolina, an estimated 17–21 million people in the United States are affected by a fear of this day, making it the most feared day and date in history. Some people are so paralyzed by fear that they avoid their normal routines in doing business, taking flights or even getting out of bed.” 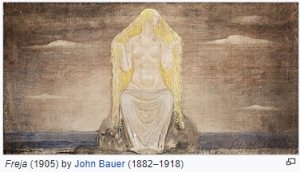 Those who know me (poor dears) know that I believe we create our own reality. So, if you don’t want anything “bad” to happen, then it won’t. Others who know me do not like my “number’s up theory,” which is that if your number isn’t up, nothing untimely will happen on the 13th. If it is up, well, you’re not safe in your own house.

I think that’s a bunch of hooey (more or less), though I stayed in my house today because on the 13th a lot of people drive drunk in hopes that zoning out will save them. Or maybe, somebody left the door open at the asylum.

I’d much rather celebrate this day for its pre-patriarchy meanings. I’m pretty sure my opinion isn’t influenced by the fact my granddaughter is named “Freya.”

Malcolm R. Campbell is the author of the four books in the Florida Folk Magic Series that begins with “Conjure Woman’s Cat.”