Junction City, Texas, Star Gazer News Service–The tear gas fired at protesters who refused to move out of the doorway of the Main Street Book Emporium was ineffective because the men protesting the loss of the “old version” of Playboy Magazine were already crying. 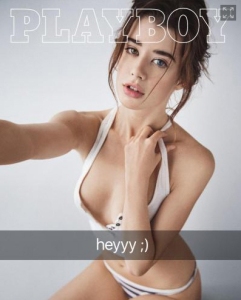 The protest began when Playboy Magazine collector Jerry Smith walked into the downtown Junction City bookstore for his monthly dose of nudity not categorized as pornography and discovered that the March issue of Playboy wasn’t “his daddy’s Playboy.”

“Has Hugh Hefner come down with Alzheimer’s, ” shouted Smith in front of the monthly meeting of the third Methodist Church’s reading club. “The fully nude chicks are gone. I’m calling out the troops.”

According to author Cane Molasses, who was working the cash register today, Smith called his friends and they “arrived on pickup trucks with large tires and demanded we sell the old Playboy.”

Jaimie McPheeters, who works at a local wagon store said, “My wife allows me to buy Playboy because she knows I’m reading it for the interview, fiction and the articles.  But no fully nude women, that’s just unAmerican.”

According to Playboy, the new version of the magazine–which still features scantily clad women–is “safe for work.” Yet both Smith and McPheeters believe the old version was safe for work and more “just fine” for today’s audience.

Informed sources who claim to have seen Hugh Hefner somewhere said “there’s a reason why General Motors isn’t selling ‘your father’s Buick.’ Playboy believes that men have evolved and that if they can’t find nude women anywhere else these days, they’re not fit to read the 2016 version of the magazine.

The men refused to leave until a representative for Bonnie’s Whorehouse invited the protesters out for a “free look and feel” day at the establishment.

“Men are wired differently than women, and praise the good Lord for that,” said Bonnie Jones (aka “Queen of the Concubines”). “They need a monthly dose of nudity in order to survive as fully functioning human beings.”

Spokesmen for the book store said that while they appreciate the men’s patronage, “Playboy Magazine no longer makes the world go ’round.”