“You are on the verge of the new age, a whole new world.
Human consciousness, our mutual awareness, is going to
make a quantum leap.
Everything will change. You will never be the same.
All this will happen just as soon as you’re ready.”

Seems a waste, doesn’t it, never getting started?

“A bit of advice
Given to a young Native American
At the time of his initiation:
As you go the way of life,
You will see a great chasm. Jump.
It is not as wide as you think.”

And, for some shameless promotion, the Kindle edition of my new novel “Lena” is on sale for 99₵ this weekend.

A Google search on the question “what do people care about” returned 636 million hits. How do you answer that question if you have to list cares in order of preference? It’s not easy, is it? Some people will be pragmatic and say “good health.” Others will be assume money can buy everything, and say “wealth.” And then there are those who want to make sure their “good health” and their “wealth” aren’t occurring under some miserable circumstances in a horrible environment, and they’ll say “power.”

I was surprised when the top answer on my search came from a 2014 post called “9 Things People Around the World Care About Most.” The people they surveyed said:

In a world where the daily news suggests that the opposite is true, I’m not sure whether I’m a hopeless romantic or just plain naive when I say that I hope this list is the reality behind all the storm and stress in our political and personal lives.

Business Insider surveyed people around the world based on the importance potential concerns were in people’s lives, finding that family, work, friends, and leisure time outweighed concerns about politics and religion. Where you are and what you lack might well play a role in what you think is important. For some people, the answer is “survival” followed by “meeting basic needs.”

I saw multiple approaches across the Internet to answering this question. Many of them focused on people who could probably be construed as middle class who were probably employed and who more or less had their daily lives under control. For example, the three top answers on Thought Catalog about things “worth caring about” were:

It’s hard to fault these answers as long as we presume they represent a mainstream, relatively affluent response that excludes people in third-world countries, surviving hand-to-mouth in a card board box on a city street, prison, gang-controlled neighborhoods, war-torn countries and other abusive-no-apparent-exit conditions. I can’t speak for them because I don’t know them and I’m not where they are. I wouldn’t fault them for saying “keep on living” or “stop hurting” or “get the hell out of this place.” (Maslow’s hierarchy of needs might determine our core cares.) Yet, the romantic in me wants to say that in their dreams and short moments of respite from the harsh realities of living moment to moment, they think about Love, Family, Friends, Inspiration, Tolerance, Animals, Laughter, Music, Happiness.

Inside or outside a mainstream religion, I can’t help but think there’s a larger order of reality behind what we care about as well as what we do to help others increase their opportunities for achieving lives filled with what they care about. Yet, as flight attendants say when warning about aircraft disasters, you have to save yourself before you can possibly do anything to save those around you. That’s probably mostly true. But how far do we carry it?

Do we need $100,000 in the bank before our survival is certain enough to allow us to reach out to others? Must our health be perfect before we can act? Some people seem to think so. But I think they miss a truth that may not be obvious: helping others helps us all. I didn’t see “helping others” as the number one concern on any lists,  but then I didn’t read all 636 million search engine responses. Some nuns, monks, doctors, nurses, first responders and others might put that answer first. I hope so because it’s nice to know somebody finds it important and perhaps that makes me feel a little less guilty for not listing “helping others” anywhere in my top five responses to “what do you care about?”

Perhaps we’re all brainwashed to see something of a genie joke in answering the question, fearing that no  matter what we wish for, the genie will give it to us under the worst possible circumstances. So, whether we’re afraid to put all of our eggs in one basket or we want to hedge our bets or we are simply human enough to care about a lot of things, we avoid the flaw of selecting one thing to top our list–or even making a list at all.

I’m not sure we can rank cares the way we list the year’s top ten movies, most popular books, or richest celebrities. Sure, we love lists showing us the top ten or the top one hundred of one thing or another, but real life isn’t a list. It’s more of a complex tangle that requires a lot of juggling, and the naive romantic part of me hopes that most people know themselves well enough to do what’s important more often than not.

–Robert Frost in “Stopping By Woods on a Snowy Evening.”

As snow fell across central and north Georgia on Christmas Day, weathermen told us this was Atlanta’s first white Christmas in over a century. In contrast with northern states where snow, salted roads and blizzards occur multiple times during the winter, Georgia snow is a big deal. Our one-to-six-inch snowfall (depending on where you were) caught the attention of local TV stations and the Weather Channel for many hours.

My wife and I were spending Christmas with her father on his farm in NW Georgia. The quiet of an evening of wood smoke and moonlight carried a hint of magic, a reminder, perhaps, of the way we felt during the best of our Christmas eves and Christmas mornings as children.

In the cycle of changing seasons, we often say that the period between the Winter Solstice and Ground Hog Day is not only the best time for planting trees, but the best time for planting figurative seeds. Our plans, goals and intentions germinate in the safe darkness of the soil beneath a fine winter snow, awaiting the sunny days when first shoots will appear, followed by leaves. The enchantment of a cold winter night in a snowy field or along the fence line margin where the world of cows ends and the dark of the woods begins, it’s easier to see one’s hopes for the future more clearly. The smoke from the chimney carries them into the heavens like prayers. 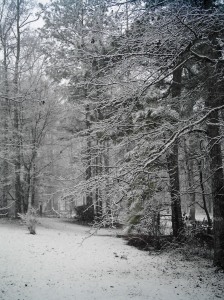 While New Year’s resolutions, at whatever level of seriousness we make them, present our public face, promises made in the quiet of the woods on a snowy evening represent our most sacred intentions. These are the promises that matter. They define who we are, why we are here, and the very best of our goals for the future.

Made in secret, they are the easiest promises to break for we suffer no public shame in failing to accomplish what nobody knew we planned to accomplish.

Made in secret, these promises are the best ones to keep. They are promises to ourselves that touch the soul. Yes, “the woods are lovely, dark and deep,” but there is work to be done, the most sacred of all work.

For now, the woods must wait.

How do we reach our goals if we keep changing them in mid-stream?

Whether we’re using law-of-attraction techniques or project management techniques, we must at some point stop changing where we’re trying to go.

In her Nonprofit World article “Do You Know Where Your Goals Are?” Michelle LaBrosse cites “feature creep” as a common blockage to meeting goals. While she is writing for a nonprofit project team or board of directors, most of us are going to recognize this blockage in our own lives:

Feature Creep: You keep adding new features, trying to make the end result better, but time is running out and your team is restless.

I know people, writers included, who create a plan to write a book (go back to school, buy a new house, start a business) who just can stop tinkering with the goal, or some part of the plan, for so long that sooner or later all the timeliness and passion are gone.

It’s easy for this to happen at a nonprofit or any other volunteer group effort. You want to be democratic and give everyone a say. But once you start moving, some people keep wanting to have another say and another one after that. If you shut them down, they accuse the volunteer leader of being a dictator. Meanwhile, those who are ready for action are getting bored and are missing meetings.

Use a change impact matrix. Plan to freeze the project at a specified time. The earlier this is done, the faster your project will move.

While that matrix can look very formal to a project manager, we can simply say that when deciding upon the goal and creating the plan in the first place, we need to understand impact of prospective or probable change along the way; is a change after the goal or project should have been nailed down of great or of minimal importance and, either way, what does it do to costs and the timeliness of the effort?

A lof of people–and groups–appear to keep goals as moving targets because it allows them the luxury of never having to commit to anything. They’re in a continual state of “mulling it over” whether “it” is a personal decision to change jobs or a nonprofit’s decision to re-do its out-of-date bylaws. Those who are doing this mulling it over often believe they are being proactive and that they are on the move.

Actually, they are blocked. They’re in infinite limbo because they are refusing to say THIS is what I’m going to do. Flexibility and adaptability are important, but we’ll be happier, I think, if we look at the number of moving targets we have and lasso a few of them and tie them down.

If you’re interested in easy-to-use information for your nonprofit and a subscription to Nonprofit World, contact www.snpo.org.