Many have said we are losing our freedom of speech. Basically, large segments of society don’t want freedom of speech, and they are making it less and less free by imposing penalties for using it. The daily news is filled with stories about people who spoke out and then got fired from their jobs, banned from the organizations they used to call home, or kicked senseless (or worse) on a city street. 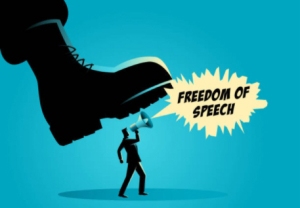 People no longer consider there’s any reason to be civil to each other: just look at the name-calling in the social media or the public statements made about newsmakers that are so vitriolic they would have been considered libel a few years ago. It’s not much of a stretch to say that if we–as a society–are now allowing violence under the threat of more violence, we’ll soon de-criminalize violence. One deterrent to Freedom of Speech is mob-enforced political correctness.

This means bands of thugs can torch a building, burn a car, or kick a person to death–all fully documented by videos and eyewitnesses–then they’ll continue doing it because–as one apologist said–violence is pleasurable–and we’ll begin living lives as though we’re all in a jungle of fang and claw. In some cities, we’re already there.

In some ways, the current chaos of violence occurs because people feel entitled to be violent. So it is, that I no longer feel safe enough to:

The problem is larger than this list, of course. But I no longer feel safe enough to say how much larger it is on this blog. I will say, that most of us see and hear enough stuff daily to know how and why the problem is larger and what it takes to solve it.

White supremacists briefly took over a reading by author Jonathan Metzl at the flagship location for Politics and Prose Bookstore in Washington D.C. on Saturday, shouting “this land is our land” and marching through the store yelling the name of a group that helped to organize the 2017 Charlottesville Unite the Right rally.

I am worried about the future of free speech because this kind of crap marks people of either major political party as targets for disruptive actions. That makes it harder for a person to speak out–or to have the guts to speak out.

As my novels suggest, I have zero tolerance for racism and white supremacy in any form. I also have zero tolerance for jeopardizing the right of anyone to speak out whether it’s from threats of violence at planned speeches by members of either party at campuses and other venues or hate campaigns against authors/bloggers online.

If a person or a group won’t even let the opposition speak, that person or group is bankrupt and without any value whatsoever.