When I run out of factory fresh books, I turn to my bookshelves and re-read older books. I stumbled into the Cormac Mcarthy section recently (I have most of his books) and read Cities of the Plain. Most things go wrong in this book, but I read it all the way through because l like McCarthy’s dialogue, descriptions, and the tone of his books. I think he writes with grit and stars rather than ink. This book has a few good people in it.

I thought, what the hell, I’ll read another. I chose Outer Dark. This novel has a lot more grit in it and even the stars aren’t clean. It doesn’t have any good people in it, though some try hard to be good in narrow ways. 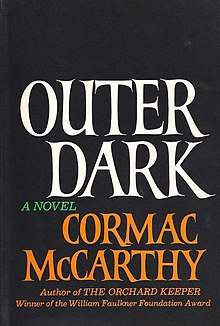 Guy Davenport, in The New York Times, said, “Nor does Mr,. McCarthy waste a single word on his character’s thoughts. With total objectivity, he describes what they do and records their speech. Such discipline comes not only from mastery over words but from an understanding wise enough and compassionate enough to dare to tell o abysmally dark a story.”

The fact that it’s so well written commits one to keep reading even though reading McCarthy is often like drinking poison for recreation. If it were badly written, it wouldn’t bother readers so much, especially when the world around us during this pandemic seems to have come out of something McCarthy might have orchestrated for his next novel or screenplay.

Time to move on to another section of my bookshelf.

Iron House by John Hart
My rating: 4 of 5 stars

John Hart’s books are among the darkest I’ve read, and “Iron House” is no exception. The story begins with an orphanage where the amenities are few, care and supervision is lapse, and groups of bullies rule the corridors and terrorize the weaker children. The darkness doesn’t begin or end here. The story features an assortment of characters nobody will like, the cruel upbringings where they were reared, and the violent lives many of them wore like armor in order to survive.

Michael has lived on the streets of New York as part of an organized crime organization that is feared above all others. When he falls in love with Elena, he wants a fresh start. However, his “colleagues” don’t want him to have any rest other than a grave. Michael is efficient, practical, and savvy, but as the plot turns in on itself with dark secrets falling like dominoes, he may not be strong enough to solve the mysteries that stand between him and saving those he loves–including Elena.

I’ve given the book four stars because I think some of the descriptions of violence and torture are excessive. However, those scenes do show the total inhumanity and animal nature of the bad guys, so they’re not totally out of place in the novel. The novel has two strong points in addition to the strong characters. First, it keeps the reader guessing because the mysteries and secrets get deeper and darker as the complex plot unfolds; second, the main characters, Michael, Elena, and Michael’s long-lost brother Julien are always at risk–and with each breath of air, the risk becomes greater as the story proceeds.

The novel shows the worst of human nature on many fronts–and perhaps the often misguided best.

Malcolm R. Campbell is the author of “Conjure Woman’s Cat,” “Eulalie and Washerwoman,” “Lena,” “Special Investigative Reporter,” and “Sarabande,” all of which you can find on Bookshop.org.