Thomas-Jacob Publishing has released my satirical mystery Special Investigative Reporter, which is a change of pace from my Florida Folk Magic series. At present, the Amazon link is displaying the Kindle edition, but will soon include the paerpback and hardcover editions. The book is also available online at Apple, B&N, and Kobo. Your favorite bookstores can order the book under standard terms and conditions from their Ingram Catalogue.

In this satirical and somewhat insane lament about the fall of traditional journalism into an abyss of news without facts, Special Investigative Reporter Jock Stewart specializes in tracking down Junction City’s inept and corrupt movers and shakers for his newspaper The Star-Gazer.Since

Stewart is not a team player, he doesn’t trust anyone, especially colleagues and news sources. Stewart, who became a reporter back in the days when real newsmen were supposed to smoke and drink themselves to death while fighting to get the scoop before their competition sobered up, isn’t about to change.

Stewart’s girlfriend leaves him, the mayor’s racehorse is stolen, people are having sex in all the wrong places (whatever that means), and townspeople have fallen into the habit of sneaking around and lying to reporters and cops.

Sure, everyone lies to the cops, but reporters expect gospel truths or else. Stewart may get himself killed doing what he was taught to do in journalism school, but that’s all in a day’s work.

Book Within a Book

In the story, Jock Stewart has released some of his columns in a book called Worst of Jock Stewart. That book is real and can be found here.

This novel was originally released by another publisher under another title (with the words “Sea of Fire” in it), but went out of print. At a time when people are complaining about biased news sources and “fake news,” the novel is more relevant now than when it first appeared.

A Letter From Jock Stewart

Jock Stewart’s letter to prospective readers, which appears on the dust jacket of the hardcover edition, can also be found on my website.

I hope you have a good time reading this satire. 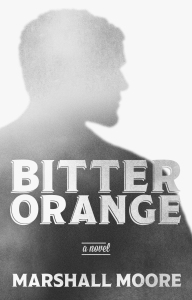 Marshall Moore follows his collection of enigmatic and delightfully twisted short stories, Infernal Republic, with an equally inventive novel about a character we can’t always see. Notice how protagonist Seth Harrington is already fading away on the book’s cover.

If Bitter Orange were a feature film showing at your local theater, a sign on the door would say: ABSOLUTELY NO ONE ADMITTED DURING THE LAST 15 MINUTES. The why of things doesn’t appear until the final pages and it’s well worth the wait.

The problem Seth Harrington thinks he has isn’t the worst problem he has. Personally impacted by 9/11, Harrington has allowed his days and nights to take on an out-of-focus aimless quality as though he isn’t engaged in his life. In spite of a fling with Elizabeth in Spain, he can’t connect with people, either because he isn’t sure of what, if anything, he wants or because others aren’t seeing him as he is.

Others not seeing him is the problem he thinks he has. By fits and starts, he is becoming invisible—literally. But unlike the daring-do characters out of comic books and high fantasy, Harrington not only can’t control his growing ability, he doesn’t seem inclined to use it to save the world or fight crime. In fact, he first uses it to steal a bottle of wine from a convenience store.

Other than his aimlessness, Harrington’s a likeable enough everyman trying to negotiate the world while getting past bitter memories and making sense of the seemingly random chaos of his daily life. In Spain, after telling Seth that Seville Oranges are bitter and bullfights are cruel, Elizabeth says, “So we came all this way for bitter oranges and cruelty to animals. And we meet here instead of back home in the States. What does that say about us?”

Back in San Francisco, Elizabeth—who becomes Seth’s tattoo artist of choice because she’s very good—wants to remain as important to him as she ever-so-briefly was in Spain. While Seth is, or potentially is, more attracted to his roommate Sang-hee (even Elizabeth begrudgingly sees it), he cannot seem to embrace the life he prefers. He speculates about just what that says about him.

As the invisibility problem becomes more complex, Seth travels to Portland and Las Vegas to try and find himself. He notes that the people in those towns can’t see him either. He feels bad taking advantage of that fact.

Marshall Moore tells an inventive story, one with prose as likeable as his protagonist, though some readers may want a  more highly focused plot. Moore keeps both the reader and his protagonist guessing about just how and why a man becomes invisible and whether the problem Harrington thinks he has is literal or figurative.

The solution to the problem provides a fitting climax to a well written, fanciful tale. Poor Seth: he didn’t see it coming.

Malcolm R. Campbell is the author of contemporary fantasy novels, including “The Seeker,” released this month by Vanilla Heart Publishing.