My favorite writing, I think can be found in my linked novels Mountain Song and At Sea. The books are true in ways I can never tell you and they speak of loss and other sad things and looking for oneself. At Sea is my Vietnam War novel. It’s still patiently waiting for the right audience to find it. Here’s an excerpt on a day when we remember those who didn’t return: 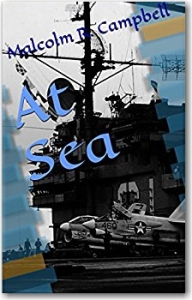 On his last night aboard ship, David stood on the catwalk after stopping by the head to wipe the blood off his hands only to discover there were no damn towels. He wondered who, if anyone, he had betrayed: Píta, his golden eagle messenger, perhaps, and the dead on Jayee’s Lists; those who called him into the center of the lotus in the sea of fire or those who called him away from the lotus. Or even Jill, one way or another. He sought clues. Yet, with the ship steaming as before at various courses and speeds on Yankee Station at condition yoke on a clear commander’s moon of a night, with sleeping birds behind him with folded wings, with eight bells struck in pairs announcing the end of the first watch, he was blind.

Angelita once told him while they were treading water at the foot of Magdapio Falls, surrounded by sheer cliffs and a hovering rain forest, “God brings to us the ones we love if our calls are pure and strong.” She looked tiny and cold in the shower of spray and quite distracted by the everlasting call of the water, but he asked her nonetheless what one ought to do if his pure call spoilt over time. She climbed out of the water on to one of the many sun-warmed rocks, grabbed a towel, and chattered out a reply. “Ask God if your true love has a sister. If she doesn’t, then call an angel.”

He headed home nonetheless, wondering how many angels a man could scare away in a lifetime: To Danang, South Vietnam, aboard the ship’s C-1A Trader. To Cubi Point aboard a nondescript plane. To the Galaxy Bar in Olongapo to say goodbye to the angel who saved his life. To Clark Air Base aboard an HU-16 Albatross. Then, to Travis AFB in California via a TransInternational DC-8, arriving on January 1, 1970.

His orders granted him an honorable discharge, for reasons of conscientious objection and though the system said it was his right to do it, he would not be much liked for signing his name on that line. Anti-war protesters at the base spat on him and called him a baby killer. Ultimately, his liberal parents would yell at him on the phone and call him a hypocrite—it would not be the last time.

Jill was not at Travis to watch him run the gauntlet of the war protesters’ love-in beneath cumulonimbus clouds spinning the scattered late afternoon sunlight into threads of gold. Her parents had lured her into their snowy world along the Lake Michigan shore for the holidays, knowing—as did she—that he would show up wherever she was whenever he showed up. Using his bulky seabag as a battering ram, he pushed through the ranting flower children toward a dull blue military bus for the ninety-minute ride to the Alameda Naval Air Station.

A tall, large-boned, gangly blond woman stood apart from the crowd with her hands on her hips. She had bangs; they hung loosely above her pale brown eyes, while her long hair swept back into a ponytail that was determined to catch in the collar of her denim work shirt.

He dropped his sea bag with a thud and they shook hands. “How did you recognize me? Are you meeting somebody?”

“Chief Coleman, of your recent employer, called me. He told me you looked emaciated, sick almost unto death. Hard to miss that. I’m here to meet you unless you want to ride to Alameda on that bus.”

“I don’t, unless you’ve got something worse.”

She picked up his sea bag as though it were weightless.

“Your Chief Coleman was also right about your wife.”

Eleanor slung the sea bag into the back of the truck. “Get in,” she said. “It’s not locked.”

“Jill’s spending Christmas with her parents.”

“With all due respect,” she said as she guided the truck out of the parking lot, “she ought to be here.”

“I wish she were,” he said. “Not that you’re chopped liver.”

“I understand. You’ll need a home-cooked meal, I expect.”

“Lucky break for me. I was expecting shit on a shingle at the base.”

“Jack loved this truck,” she said, and settled back in the seat like she wasn’t expecting a response.

The world flowed by, a normalcy of sorts. She looked at him from time to time, a pragmatic smile washing across her squarish face. South of Pinole, she told him the first money from Chogori was sending her back to school to get her teaching credentials. South of El Cerrito, she told him he would have to convince her over her best pot roast that Jack really had a fair hand in writing the book; it seemed so unlike him. As they drove through Berkeley, he told her about the hell-bent-for-leather Mt. Olomana climb, and she said that was Jack.

Then she said, “Your wife should have met you at Travis, not because you came home from a war or even because you survived. Survival isn’t our first duty. When you took a stand and became a conscientious objector, you became your true self.”

“I am not without regrets.”

“I don’t doubt it. They’re battle scars. Your family and friends will never see them. You will always feel them, don’t you think?”

“I do,” he said, happy that she couldn’t see the blood on his hands.

“These heroes are dead. They died for liberty – they died for us. They are at rest. They sleep in the land they made free, under the flag they rendered stainless, under the solemn pines, the sad hemlocks, the tearful willows, and the embracing vines. They sleep beneath the shadows of the clouds, careless alike of sunshine or of storm, each in the windowless Place of Rest. Earth may run red with other wars – they are at peace. In the midst of battle, in the roar of conflict, they found the serenity of death. I have one sentiment for soldiers living and dead: cheers for the living; tears for the dead.”

Many online images remind us that this is a day of memories, one that clashes with wishes for a “Happy Memorial Day” and with images of barbecues and shopping.

I served on an aircraft carrier. Please don’t thank me for my service today. Save those kind wishes for Veterans Day. Thank those who didn’t return for giving everything they had.

This is a day of reflection, I think. What do we have? Who helped us establish it and preserve it? Have we honored their sacrifice by doing the best we can to govern fairly within the scope of the Constitution? Were the wars that took their lives just and meaningful and necessary?

Difficult questions, I know, but more important that asking “Where can I get 25% off on my purchase of a new riding mower?”

Barbecue if you must, but don’t forget why you’re able to do it.

Farming Soul: A Tale of Initiation by Patricia Damery
My rating: 5 of 5 stars

Author and Jungian analyst Patricia Damery and her husband Donald grow grapes and heather in California’s Napa Vally where their biodynamic farming practices and spiritual attention to the land have brought them a rich harvest. That harvest, as described in “Farming Soul: A Tale of Initiation,” is simultaneously agricultural, psychological and transcendent.

“Storytelling opens us to aspects of ourselves that we override in every day life,” writers Damery in the book’s introduction. “It weaves both teller and listener into a larger fabric, suggesting correlations and increasing understanding.”

Damery’s story echoes John Muir’s words, “I only went out for a walk and finally concluded to stay out till sundown, for going out, I found, was really going in.” Going out and going in intertwine in Damery’s journey where the lessons learned en route to becoming a Jungian analyst complement lessons learned in the vineyard.

Rudolf Steiner, the father of biodynamic agriculture, wrote that “All of nature begins to whisper its secrets to us through its sounds. Sounds that were previously incomprehensible to our soul now become the meaningful language of nature.”

Damery’s memories, dreams and reflections are woven from the warp and woof of her experiences arising out of analysis, meditation, shamanism and farming. “I understood,” she writes, “that the ‘garment of brightness’ from the Tewa song was being woven for me, and that, in time, perhaps I could ‘walk fittingly’ on this earth.”

Farmers, psychologists and other seekers on the path will find many correlations between their own journeys and the one that so beautifully unfolds in “Farming Soul.” Damery’s garment of brightness is kind lamp for eager eyes.