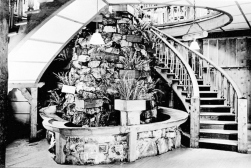 When we moved in January to a new house on a corner of the farm where my wife grew up, we ended up with a variety of outbuildings that had had minimal use for years. We’re using the old garage for our riding mower and other lawn tools. Since it sits near our house, we had the old smokehouse restored.  So far, we haven’t decided what to do with the old chicken house.

Ten years ago, a fire destroyed two other buildings and damaged the chicken house. Except for wandering free-range chickens (if any), a chicken hasn’t been in there for ages. My wife’s folks stored hay in the building before the barn was built. Since her dad was a contractor, the building became a convenient place to store lumber left over from one job or another.

As the pictures show, Mother Nature keeps an eye on abandoned buildings, waiting for an opportunity to reclaim them for wild

things, nature spirits and haints. We had’t gone inside this building since we moved here. Well, obviously any rehab of the building is going to have to start with a lot of clearing away around the outside. Once we get fences put in, we’re probably going to get a few goats.

Could one end of the building be turned into a shelter for them? Maybe. Could some of it be used for storage. If so, we might be able to put the tractor in there. Right now, it’s taking up half of the old garage which sits much closer to the house. The tractor hasn’t been cranked up since last year; it needs a new bush hog if we’re ever going to use it for some of the grass that we’re currently mowing with the riding mower.

On the plus side, there’s probably enough lumber stored inside the building to rehab the building. We might need some more tin, though. (No, we’re not going with a copper roof in one of the colors currently in vogue in subdivisions.)  Well weathered tin and old one-by-sixes are part of the textured charm of old buildings. More often than not, buildings like these were never painted. You don’t see a lot of “barn red” around here.

When I served as the chairman of a historic preservation commission in the small town where we used to live, our group championed the cause of adaptive re-use. Our old cotton mill, for example, had been converted into a world of shops. This preserved the old building and also the character of the town. Atlanta has had some success preserving old brick factory buildings and using them for loft apartments.

We don’t need (or want) a chicken house. While a very conservative preservationist might tell us to make the building a chicken house again even if we never bought any chickens, there’s no evolution in that. We can adapt. For one thing, if we made it a chicken house, it would sit unused rather like a museum display. Nature would start working on it around the door frames and the gaps in between the shiny new sheets of tin. For another thing, having a ready-to-use chicken house sitting there is probably unlikely to help us resell the property some years down the road.

Idly, I wonder what we’ll do with the leftover lumber.  That’s not a big concern, because I think it will find its way somewhere, a place where it will keep its texture while serving a brand new purpose–like any old building or retired person.

Malcolm R. Campbell is the author of the Pushcart Prize nominated “Conjure Woman’s Cat,” magical realism set in the Jim Crow era of Florida. A conjure woman ends up battling the local KKK with folk magic and, as the title suggests, the help of her cat.