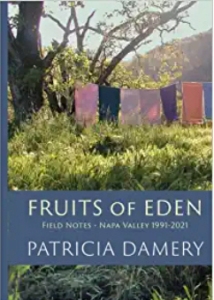 I have mourned the overdevelopment in California (the state where I was born) and the overdevelopment in Florida (the state where I grew up). In both cases, environmentally diverse and beautiful states have been ruined and badly compromised for the sake of tourism and development that left no stone unturned in raping the best areas first. The late Atlanta historian, Franklin Garrett, called this approach to land use within a city “municipal vandalism.” Insofar as California and Florida are concerned, I call it near-criminal destruction of the land.  Years ago, a minister said the real Garden of Eden was in west Florida. If that had proven true, it would have been paved over by now.

So I warn you, I supported this book before I even saw it.

I must also confess that I have known Patricia Damery online for years and enthusiastically reviewed her earlier books. This book comes from the front lines of climate change and bad land-use practices. So, I can’t help but show it to you in spite of my prospective biases. By the way, you can see an interview with Pat here. The book comes in two editions, one with the interior photographs in color, and the other in black and white.

Damery’s articulate and Illustrative voice is a powerful call that interweaves the story of her ranch with her history, reflections, marriage, and her husband’s onset of dementia. His Alzheimer’s began at the same time as pressure on the ranch’s sustainability became acute. Conversely, there is also great hope. The author’s relationships with colleagues in action for the valley, her children, her grandchildren and friends all share a deep love for this extraordinary place on the planet.

Over the decades Damery and her husband, Donald Harms, developed a way of life that respected the natural ecology of their land in the Napa Valley. They applied organic and biodynamic methods, left large parts in their natural state, and had a herd of goats that lived next to Patricia’s writing studio. Then climate change coupled with egregious overdevelopment overcame them, threatening to destroy their way of life. Destruction of native oaks caused erosion and groundwater depletion, insecticide use disrupted the balance of animal life, including beneficial insects, population density and tourism

I visited Napa Valley multiple times before the nefarious amongst us began turning it into hell. I don’t want to go back there again any more than I want to see again what the fools who created Daytona Beach have done to the once-precious land along the Atlantic coast. But with the help of books like Fruits of Eden and their from-the-trenches authors, maybe we can save some of the endangered Edens that remain.

Malcolm R. Campbell is the author of “Conjure Woman’s Cat.”