If Schrödinger’s cat were my cat, I’d never open the box. I feel the same about a scene in my novel in progress in which Character A tells Character B that Character C is dead. I don’t want Character C to be dead, so I keep tinkering with other parts of the novel rather than writing that scene. (For those of you who worry about such things, Character C is not Lena the cat.) 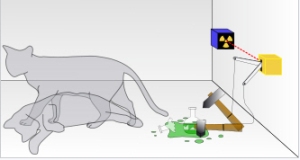 Schrödinger proposed the cat in the box thought experiment in 1935 to illustrate the problems he saw with the Copenhagen interpretation of Quantum mechanics.  In this interpretation, the cat will be neither dead nor alive until the box is opened. I prefer the Many Worlds interpretation of quantum mechanics because it makes more sense to me than the other ways of looking at the world. But it doesn’t solve my problem because it suggests the cat is both alive and dead when the box is opened and that each version will spin off into a different universe as the cat and the observer become entangled. The universes and those within them are not aware of each other.

Suffice it to say, I’m not writing a novel that branches into two sections, one that you read if you think the character is dead and the other if you think the character is alive. I’ve done things like that in the past with my fiction and readers don’t want to go there.  If I did go there, new universes would form, one in which readers finish the book and one in which they don’t.

Now that I’ve clarified the arena where my probable scene remains in limbo, you no doubt understand why I have not written that scene. At present, I either write the scene or I don’t. Either way, the probable universes are infinite.

Unfortunately, the plot–to the extent that I even know it–doesn’t work if Character C is alive.

Perhaps Character C can appear to die but still be around. I don’t think the Many Worlds interpretation allows for that. Or, maybe that happens in a third universe.

Right now, of course, there’s a universe of people who read this post and another one with people who didn’t. I have no control over that because that’s simple reality. As you can see, the role of the writer in this world (or any world) is more complex than it seems. 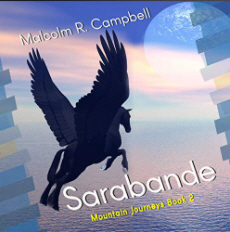 Malcolm R. Campbell is either sane or insane. Until he’s released from the asylum, he continues to write books like Sarabande.