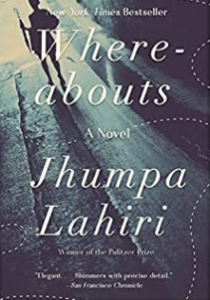 If you sharpen a knife for too long, you ultimately have nothing left. This novel treads closely to that eventuality. Lahiri has removed everything readers look for in a work of fiction, presenting us with a plotless, episodic story told in short chapters out of which most of the unnamed, middle-aged female protagonist’s soul has been honed away.

Nonetheless, each rather mundane moment, hanging as it does between engagement and lack of engagement with the world packs a punch that can be likened, perhaps, to a velvet hammer or the piercing shiv that remains of the original knife. The overall effect is reminiscent of a child standing that the ocean’s edge, eager to plunge into and experience the water and yet content to stand in the littoral zone between land and sea–or, in the character’s case–between stubborn loneliness and interaction with others.

Her father is dead and her relationship with her mother is strained. Yet she meets others, casual friends and/or acquaintances on the street, even lovers sometimes, without undue suffering. In fact, she tentatively seeks others out but stands back from total or long-term commitment.

There is hope here even though everything human seems transitory, like leaves that will soon be blown away by the wind. And yet, she waits and ages.