My memorites of time served in the navy, working as a seasonal employee in Glacier National Park, Boy Scout camping trips, various jobs and all kinds of hobbies and avocation have provided the inspiration behind a lot of my work. The danger here is that when you’re almost older than dirt, the fictional version of those memories used in your novels and stories gets mixed up with what really happened. (I should have kept a diary.)

Some memories are almost universal and capture readers who’ve gone through similar experiences:

I’ve used a lot of this in my stories, though I cannot tell you when and where because, well, the truth behind the stories is rather confidential.  Sure, there may be awkward questions from friends and family, such as “How did you write about these bar girls so realistically” and “You really did a good job with those drunk tank scenes; how did you know about all that?”

Imagination and research. That answers all questions even if your memories were part of the research. 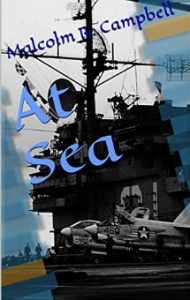 Of course a lot of stuff in this novel really happened. That’s the beauty of having been there. You have an infinite amount of material. The ship in the cover picture is the ship I served on during the Vietnam War. There were hundreds of stories there because it was a large ship and had a large crew.