A text message from an unknownn number asked if I lost a wallet. I had. He had found it in a ditch, the place where wallets often end up when somebody steals them, pulls out the cash, and throws the remains out the car window.

We met at a well-known store a block from his house. He was scruffy, unshaven, riding an old bike like so many people I see along the highway. But he had my wallet. I looked through it and saw that everything was ther except for the cash. 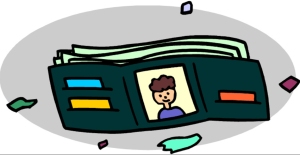 They didn’t touch the credit cards, I said. Too much hassle, he said, lighting one of the cigarettes that probably helped keep im as thin as a rail. I told him I cancelled the cards within an hour of losing the wallet. Smart, he said. I said, well, as you can see, they cleaned out my cash, but can I give you something for your trouble. No need he said, but after hemming and hawing took the $20 and rode off down the highway after we shook hands.

When I wished him a happy new year, he indicated he’d be drinking. I said that worked for me as long as it was quality. We agreed that neither of us could afford quality but allowed as how we tried to avoid the swill.

We’re kindred spirits on that matter.

Malcolm R. Campbell is the author of the satire “Special Investigative Reporter.” It’s definitely good for a few laughs.