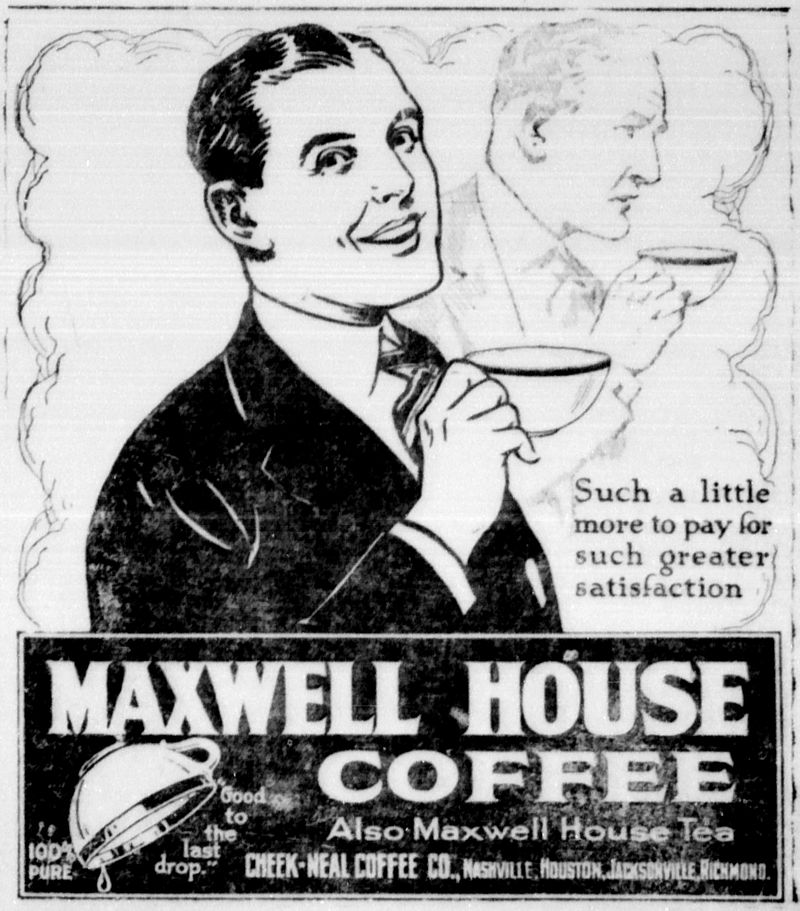 I grew up on Maxwell House coffee and still use it today. It outsold everyone else until the 1980s and now has become the brand everyone likes to make fun of. When I was a kid, it was made in a percolator. Now I use a drip coffee maker. (A Mr. Coffee, if you must know.)

I won’t touch a French press (too much trouble) and think Keurig coffee tastes awful. As for Starbucks, the prices are absurd and the culture of the whole shebang has elite written all over it. Barista? I think not. Just pour the damn coffee out of a Cory coffee maker rather than making a religion out of it.

Okay, I’m out of sync with the times, coffee-wise, and darned proud of my Maxwell House and Golden Cup (Waffle House) heritage.

Or, maybe cultured people never drank the last drop because doing so looked greedy and needy and was frowned upon. If that was the case, they never had any idea what–if any–evils lurked in the last drop.

Now that Maxwell House is part of the giant Kraft Foods conglomerate, the question of the safety and goodness of the last drop will probablty never be answered and I’m not going to start licking the bottom of my cup to find out. When we were kids, we were told not to lick the bottom of our cup/glass/stein/tankard/Mason jar. Doing so was unseemly, almost as bad as loudly crunching up the ice from a sweet tea glass.

Teddy Roosevelt, who purportedly was the first person in the universe to say Maxwell House is good to the last drop was probably too busy to ever drink that last drop. So, everything else in the cup was all he knew. Well, bully!

Malcolm writes his novels while drinking Maxwell House coffee and certifies that his books are good to the final word.

2 thoughts on “What’s wrong with the last drop?”