Now as I was young and easy under the apple boughs
About the lilting house and happy as the grass was green,
The night above the dingle starry,
Time let me hail and climb
Golden in the heydays of his eyes. . .

from “Fern Hill” by Dylan Thomas

When I first explored the mountains of Glacier National Park, “time let me hail and climb golden in the heydays of his eyes.” I thought those trails and those days would go on forever even though I had read the Dylan Thomas poem many times and knew how it ended. Even though grandparents are around us when we are young, we still think we will always be young and, that if we won’t, old age is eons away in a future too far away to fathom.

When we’re young, it’s hard to imagine being old. When we’re old, it’s easy to remember being young just as I remember the first time I read “Fern Hill” and was concerned about the words: “ In the sun that is young once only, time let me play and be golden in the mercy of his means.”

As I write a novel now about a character following a trail near Piegan Mountain, I must rely on the videos and descriptions of younger men and women, those who are still healthy in time’s golden era. If I’d only known, some 50 years ago, that I’d be writing this novel, I would have taken a hundred photographs along the trail that led from Going to Sun Road to Many Glacier Hotel. But I was too enchanted within the moment to create a photographic diary on Ektachrome film. (Regrets, I’ve had a few.)

If there’s a learning experience in all this, it’s to push on with the writing using the resources I can find rather than wishing (a) I could be young again, (b) took 1000 photographs of everything, and (c) ruined my life experiences by slavishly documenting them for those old-age years when they would be beyond reach.

When we have finally followed time out of grace, our memories must suffice, all the more sweet because they are so tangled and unclear rather like a dream of once walking the high country when knees and ankles and breath were strong and the sky was blue and full of endless promise from side to side. 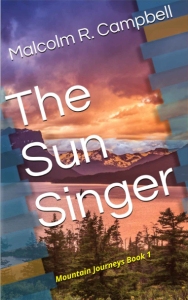