Crime and courts reporter, columnist, and 15-year “What’s My Line” panelist Dorothy Kilgallen died on November 8, 1965. I remember when it happened because I watched “What’s My Line” in those days and thought that there was something odd about her death.  I liked her because she was very good at figuring out contestants’ occupations on the show and, in a media world dominated by men, she was one of the best reporters in the business (Hemingway was among those who thought so).

Mark Shaw has written two books about her, The Reporter Who Knew too Much and Denial of Justice in which he clearly believes she was murdered, and lays out as much evidence as he can find to support that theory. While her death was generally presumed to be an accidental overdose of sleeping pills combined with alcohol, two of the drugs in her system, and in the residue of one of two glasses on her nightstand, weren’t drugs prescribed for her and that she was never known to take. 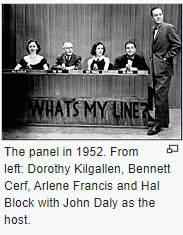 There was never a formal police investigation even though the circumstances surrounding her death were odd and should have raised multiple red flags. Shaw wants the case to be re-opened, but that seems unlikely since most of the witnesses are gone and the crime scene in her home is gone. By the time I finished reading Shaw’s books (“Denial” is largely a rehash of The Reporter Show Knew Too Much) all I had was a long list of suspects.

Suspects include: Her husband (they led separate lives), Frank Sinatra (long-time feud), FBI/CIA (to stop her JFK/Ruby/Oswald investigation that might uncover secrets the government didn’t want to be known), organized crime (that might have been complicit in the JFK assassination). Certainly, her husband had the easiest opportunity while those who think, as Kilgallen did) that there was something fishy about JFK’s death and the government’s handling of it, will suspect, possibly, the CIA.

Shaw has done a lot of research (click on his name above for more info), but the books are not really organized well (my opinion), so when one finishes them there’s a great sense of frustration, mainly at how badly the police and the medical examiner handled things in 1965 and partly because Kilgallen’s family hasn’t been as supportive of Shaw’s efforts as one might hope.

The books raise more questions than answers, but certainly provide a lot of information about the probable answers to those questions. We may never know, and it’s quite possible that people are around who want to make sure we never know.