I seem to remember most things. But reality and my memory often diverge greatly when I think back to old TV shows that seemed like they were on for years that were, in fact, hardly on at all in spite of their great followings and influence. Two of my favorite shows were “The Honeymooners” and “Fawlty Towers.” I thought they were on forever, say, like “Grey’s Anatomy” or the “Johnny Carson Show.”

“Fawtly Towers” aired in 1975 and 1979 with a total of 12 episodes. “The Honeymooners” aired from 1965 to 1970 with a total of 39 episodes, though there were attempts to bring it back later. One of my favorite cartoons during the last several years showed astronauts exploring the moon and coming across a body. One of them says, “It’s Alice Kramdem.” The show had a lasting impact for a cartoonist to think of that and for people to know what it meant. 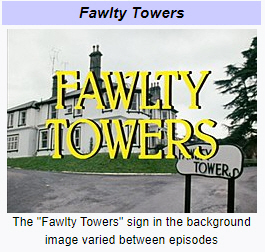 Looking at how I turned out, I’m sure that an entire generation of otherwise sane individuals was warped silly by its exposure to these shows. I’m pretty sure that “Twin Peaks” and “Lost” probably put more viewers into asylums, but Jackie Gleason and John Cleese probably had a lot of questions to answer about the impact of their shows on our sanity when they reachers the Pearly Gates.

Do you ever get the feeling after watching a TV series or feature film that you are warped for life. Not only that, but the series or the film seems longer than it was or, worse yet is still going now every time your turn off the light and fall asleep? You leave the TV on in hopes that it will drown out the recurring dream, but still, you hear:

Basil Fawlty:
Then why is she telling you?

My theory, especially with shows like ‘Twin Peaks” and “Lost,” is that the writers got drunk and/or addicted to heroin and lost track of what they were doing.  The thing is, you get addicted along with the writers and the stars. Being addicted means you are lost to the real world and are hopelessly stuck inside the minds of Mark Frost and David Lynch or John Cleese and Connie Booth.

So time becomes fluid, like bad booze in a sordid bar in New Jersey. You wonder if all these people are in your closet or under your bed. They probably are. But they’re part of your life now even if your memory of how they got there is a bit shabby.

I might have been drunk and/or addicted to heroin while writing this novel, so it might just get stuck in your dreams. You have been warned.