The movie was great: plenty of action, great cast. I’ve seen it multiple times. Since I was low on factory-fresh recent books and/or waiting for those prices to go down, I picked up a copy of the paperback and read it out of curiosity. It’s well written and was a fun read.

I had to work to keep from seeing the movie in my mind’s eye while reading the book. I’d rather let my imagination create “what things look like” as I read, but that’s difficult to do when you’ve already seen the movie. So, I kept seeing Sean Connery and Alec Baldwin.

Needless to say, the book had a lot more going on in it than the movie. Yet, I can see why they cut what they cut (to avoid a four-hour film).  In general, I liked the book’s plot more than the movie’s plot because it gave the reader a much better picture of what might really happen as the (seemingly) entire Russian navy suddenly approaches the U.S. in search of their rogue sub, leaving the powers that be in our government having to respond in case all those Russian ships out there are an invasion.

One of the best scenes of the submarine Red October racing along the seafloor in a dangerous area doesn’t even happen in the book. I was disappointed in that.  Yet, intercepting Red October is much more complex in the book. I appreciated that because it seemed closer to what would happen in “real life.”

I missed the scene from the movie in which Red October travels up a river or estuary with Baldwin (CIA) and Connery (submarine captain) talking about the fact that the area has some great fishing. Both men liked fishing and Connery was hoping he’d be able to do it in his new country. It was a nice scene.

But, I’ve come to expect this, the simplification of movie versions to fit into a manageable running time. So I end up liking both the book and the film versions for what they were within the constraints of the presentations. For those who have read the book and seen the movie, there’s a decent comparison here.

If any of you have read the book and also watched the movie, I’d be interested in your impressions of the two versions of the story.

I’d like to see a movie version of Conjure Woman’s Cat. 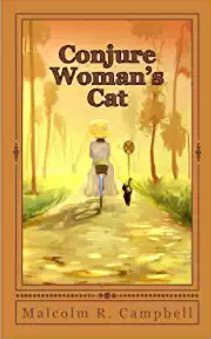