The tall bookshelf on the righthand side of our living room fireplace was either magic or was monitored by my parents who put books there–from some hidden trove–during my junior high and high school years when I was deemed ready to read them.

One of these was a small book in a plain brown dustjacket written for young men who were old enough to learn how sex was accomplished. I read it in my bedroom and then put it back on the tall bookshelf from which it soon disappeared until it was time for the middle brother to read it. I have no idea what the book was called or when it was published. In general, the words and illustrations were more accurate and of higher literary quality (less profane, too) than the information written on the restroom stalls in the men’s bathrooms at school. 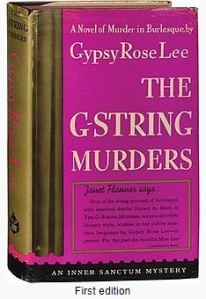 I still have the second book that appeared about the time the movie “Gypsy” was released in 1962. When I didn’t return it to the tall shelf, nobody mentioned it. It appeared after the book about how to have sex, though I didn’t need a set of instructions to enjoy Gypsy Rose Lee’s 1941 detective novel The G-String Murders. I liked the book. I still do. And I think she wrote it or wrote most of it in spite of the fact various people think somebody else wrote it.

It’s set in a burlesque theater with a narrator named Gypsy. According to teacher and scholar Maria DiBattista, “The book is still readable today for its brisk, sometimes witty, and unapologetically randy account of the personal and professional jealousies, the routines and props (the grouch bags, pickle persuaders, and, of course, G-strings), even the substandard plumbing common to a life in burlesque.”

Letters that Lee sent to Simon and Schuster while she was writing the novel tend to prove that she wrote it rather than W. H. Auden, Craig Rice, and other suspects. The book is still in print.

“Narrating the twisted tale of a backstage double murder, Gypsy Rose Lee, the queen of the striptease, provides a tantalizing glimpse into the underworld of burlesque theatre in 1940s America. When one performer is found strangled with a G-string, no one is above suspicion. A host of clueless coppers face off against the theatre’s tough-talking guys and dolls, and when a second murder occurs, it’s clear that Gypsy and her cohorts will have to crack the case themselves. A dazzling and wisecracking murder mystery noir that was the basis of the 1943 film Lady of Burlesque, starring Barbara Stanwyck.”

In part, I think it’s the movie (inspired by her memoir Gypsy: A Memoir) “Gypsy” with Natalie Wood and this novel that keep Gypsy Rose Lee’s name from fading out of the public’s consciousness. After all, burlesque is long gone. She lived between 1911 and 1970. In her later years, she appeared here and there including “Hollywood Squares.” In 2010, novelist Karen Abbott released the novel “American Rose: A Nation Laid Bare: The Life and Times of Gypsy Rose Lee” to high acclaim.

So, Gypsy is still here one way or another, and that first edition copy isn’t leaving my shelf.