“So we beat on, boats against the current, borne back ceaselessly into the past.” – F. Scott Fitzgerald in The Great Gatsby

One thing I’ve noticed while growing older is that many of the films I thought would be remembered for all time are more or less unknown to everyone under thirty.

The TCM Channel on DISH shows a lot of these old films, my favorites generally being those on the Noir Alley segment. I find that only film aficionados have heard of most of the films and actors I like and “grew up with.” 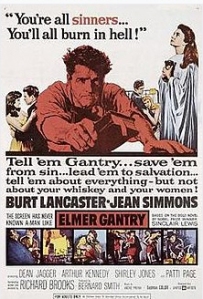 Today’s films attract attention. I think every generation has probably felt this way. So, when I mention on Facebook that my wife and I watched such and such, the general reaction is “say what?” or “who is Burt Lancaster?”

I liked the 1960s drama “Elmer Gantry,” for example. It did well even though it didn’t contain much of Sinclair Lewis’ book. Today, the movie is more or less unknown along with many others that included Burt Lancaster and that were well received.

My parents used to talk about old movies, but since they weren’t readily available on cable and satellite TV channels then, I never had a chance to see most of them when I was young. Now I can see them long after my parents are gone.

I wish I could have watched some of my parents’ favorite movies while my parents were alive. I’m not sure that today’s young people will care much about the movies and books my generation liked while growing up. Today’s memories seem shorter, less concerned with “the old days,” and more focused on this moment.

That’s okay, I guess, but also sad as some of the best we knew fades into the mists of time.

Everything we write is fleeting, here today and gone tomorrow, and yet, it’s still there waiting for readers.

2 thoughts on “Favorite movies fading into the past”