My Montana novel Mountain Song will be free on Kindle for three days, February 8 through February 10. Previously called The Seeker, the novel is the first of my two David Ward novels. At Sea is the sequel. 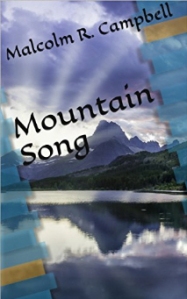 David Ward lives in the Montana mountains where his life was impacted by his medicine woman grandmother and his utilitarian grandfather. Anne Hill suffered through childhood abuse and ultimately moved in with her aunt on the edge of a Florida swamp. Their summer romance at a mountain resort hotel surprises both of them. But can they make it last after the initial passion wears off and they return to their college studies far apart from each other especially after an attack on a college street changes Anne forever?

This novel is set in Glacier National Park Montana where I worked for two summers as a resort hotel employee. It’s also set at a fictional Montana sheep ranch and at a real Florida Panhandle swamp. The characters move around a bit, one might say. The mountain on the cover is named Heavy Shield, previously Mt. Wilbur, and can be seen across Swiftcurrent Lake from Many Glacier Hotel on the east side of the park.

You can find information about all of my books on my website.