As I watched “The Queen’s Gambit” about an orphan chess prodigy named Beth Harmon in the miniseries on Netflix, I kept thinking about Bobby Fischer whom I think was the United States’ best chess player ever. He, too, was a prodigy and after achieving great things in chess, things went badly for him. From a layperson’s viewpoint, he became (or possibly always was) a psychological mess. And we all watched him self-destruct. 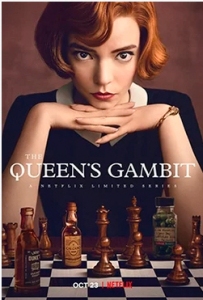 There are two gifted people in my family. One is gone. One struggles on. Like those I’ve read about, they were and are at odds with life itself. Anya Taylor-Joy does a wonderful job portraying a fictional gifted child who becomes a prodigy and achieves great things in chess.

She has huge issues with alcohol and drugs and implodes occasionally throughout the series into multi-day episodes that might well end her life and career. As the episodes moved toward the all-important-big-game finish, I came to dread the ending of the series because, having imploded during one big match, Harmon seemed likely to implode again.

The series was so well done, I expected to see the main character fall apart, Bobby-Fischer-like before all was said and done.  I’ll give you no spoilers here, but the ending was better than I expected.

I fear for the gifted child. I have seen several up close and nobody knew what to do with them, much less how to save them. If you like drama, whether you play chess or not, this is a wonderful series. And yet, it will haunt me because it reminds me of people I have known.

Malcolm R. Campbell is the author of multiple magical realism, contemporary fantasy, and paranormal novels and short stories. The most recent is “Fate’s Arrows.”